Prime Minister Abiy Ahmed become the first Ethiopian to win the 2019 Nobel Peace Prize for his efforts to achieve peace with neighboring Eritrea.
He was awarded the prize Friday for his; “efforts to achieve peace and international cooperation and for his decisive initiative to resolve the border conflict with neighboring Eritrea.” PM Abiy worked with Eritrea’s President Isaias Afwerki on the peace agreement, to end the two-decade long conflict.
“An important premise for the breakthrough was Abiy Ahmed’s unconditional willingness to accept the arbitration ruling of an international boundary commission in 2002,” the Nobel Institute said in statement.
During PM Abiy’s first 100 days as Prime Minister he has also “granted amnesty to thousands of political prisoners, discontinuing media censorship, legalizing outlawed opposition groups, dismissing military and civilian leaders who were suspected of corruption, and significantly increased the influence of women in Ethiopian political and community life.”
A statement from the office of Prime Minister Ahmed said since coming to power in 2018 he had made “peace, forgiveness and reconciliation key components of his administration.”
“This victory and recognition is a collective win for all Ethiopians, and a call to strengthen our resolve in making Ethiopia – the New Horizon of Hope – a prosperous nation for all,” the statement added.

“I am so humbled and thrilled … Thank you very much. It is a prize given to Africa, given to Ethiopia, and I can imagine how the rest of Africa’s leaders will take it positively to work on the peace building process in our continent,” PM Abiy said. “I am so happy and I am so thrilled for the news … Thank you very much, it is a big recognition,” the PM said while talking to Olav Njølstad, Secretary of the Norwegian Nobel Committee shortly after the announcement of the 2019 Nobel Peace Prize.
Responding to the announcement that Ethiopian Prime Minister Abiy Ahmed has been awarded the 2019 Nobel Peace Prize, Amnesty International’s Secretary General Kumi Naidoo said “this award recognizes the critical work Prime Minister Abiy Ahmed’s government has done to initiate human rights reforms in Ethiopia after decades of widespread repression. Since assuming office in April 2018, it has reformed the security forces, replaced the severely restricting charities and society law, and agreed to a peace deal with neighboring Eritrea to end two decades of hostile relations. He also helped broker an agreement between Sudan’s military leaders and the civilian opposition, bringing an end to months of protests.”
“However, Prime Minister Abiy Ahmed’s work is far from done. This award should push and motivate him to tackle the outstanding human rights challenges that threaten to reverse the gains made so far. He must urgently ensure that his government addresses the ongoing ethnic tensions that threaten instability and further human rights abuses. He should also ensure that his government revises the Anti-Terrorism Proclamation which continues to be used as a tool of repression, and holds suspected perpetrators of past human rights violations to account.”
“Now more than ever Prime Minister Abiy must fully espouse the principles and values of the Nobel Peace Prize to leave a lasting human rights legacy for his country, the wider region, and the world,” Naidoo said.
The U.S. Embassy in Addis Ababa also congratulated PM Abiy on being the 100th recipient of the Nobel Peace Prize for his “…efforts to achieve peace and international cooperation and his decisive initiative to resolve the border conflict with neighboring Eritrea.” The embassy said in a statement that they joined all Ethiopians as they celebrate this proud moment for Prime Minister Abiy and the people of Ethiopia.
Swedish climate activist Greta Thunberg had been the favorite to win. Abiy Ahmed, elected leader in 2018, was the bookmakers’ second favorite to win. New Zealand Prime Minister Jacinda Ardern was also a contender, lauded for her response to the Christchurch shooting earlier this year.
This year’s peace prize was the 100th to be awarded. According to the Nobel Institute there were 301 nominees in the running for this year’s peace prize, the fourth highest on record. The record was 376 candidates in 2016. However, the list of nominees is only revealed 50 years after the prize is awarded.
Congolese doctor Denis Mukwege and human rights activist Nadia Murad were joint winners in 2018 for their efforts to end the use of sexual violence as a weapon of war. 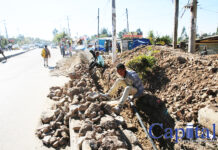 EU to support 1 Trillion Euros of investment for sustainable climate...