The Addis Ababa Trade Bureau, is planning on replacing the sometimes inaccurate analog scales with digital scales to weigh fruit and meat in many retail shops by this coming February.
Traders will cover the costs of the 8,000 scales which will be floated via tenders for importers. A source in the trade bureau told Capital that fruit and meat sellers will be the first mandated to use the digital scales and that this is expected to occur shortly. Right now there are approximately 50,000 analog scales in shops half of which are in retail markets.
The Trade Bureau has been very suspicious about the accuracy of the analog scales so they are planning to replace them with digital scales to put them on the market at places that sell fruits, meat and other retails shops.
The 8,000 scales whose cost will covered by Sthe traders themselves will be floated in tenders for the importers who have the capacity to bring them from abroad.
A source in the trade bureau told Capital that fruit and meat sellers will be the first target to use digital scales to weigh their goods.
Currently there are over 50,000 analog scales and more than half are found in retail markets selling a variety of goods.
The source added that the replacement of the digital scales will begin in a short period of time.
“There is one proclamation we requested that the trade ministry to forcefully make traders use digital machines and I hope this proclamation will be effective in the coming one month and then we will go to the market and let the traders use the digital machines and we will give awareness raising to the consumers about the importance of measuring their goods on digital scales and in parallel we will supervise the market about how to use these scales.
A recent study from the Trade Competition and Consumer Protection Authority (TCCPA) indicates that some butchers are using fake scales to cheat customers by as much as 140 grams of meat when they purchase a kilogram.
The study, which focused on meat and retail commodities showed that many of the scales used in Ethiopia are substandard regardless if they are digital or analog, meaning that consumers often end up getting the short end of the stick when it comes to purchasing meat.
Of the 12 consumer associations 83 percent of butchers who sell a kilo of meat for 80 birr deduct from 10 to 143 grams from a kilo of meat, which means consumers loose more than 2,000 birr per 100kg meat.
The study also looked 21 private butchers who sell a kilo of meat for 160 birr or above and found that 64 percent of them cheated customers 130 grams per kilo of meat because they used bad scales.
According to the study conducted on 76 retailers who sold sugar, salt, coffee, wheat, white flour, and lentils from 5 to 15 grams is deducted by incorrect measuring scales.
The fake weighing machines are manufactured using cast-iron instead of aluminum and are being used by the traders to cheat the unsuspecting customers.
Many complain that they are being taken advantage of by sellers and the Authority is blaming the Addis Ababa Trade Bureau for not taking action.

ODE TO THE KING WHO LOVED CULTURE 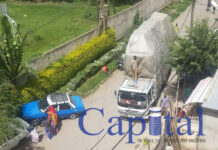 COPING WITH CRISIS THROUGH CULTURE

ECX warehouse receipt can be used as collateral

Smart technology fundamental for airlines to safely return to the skies