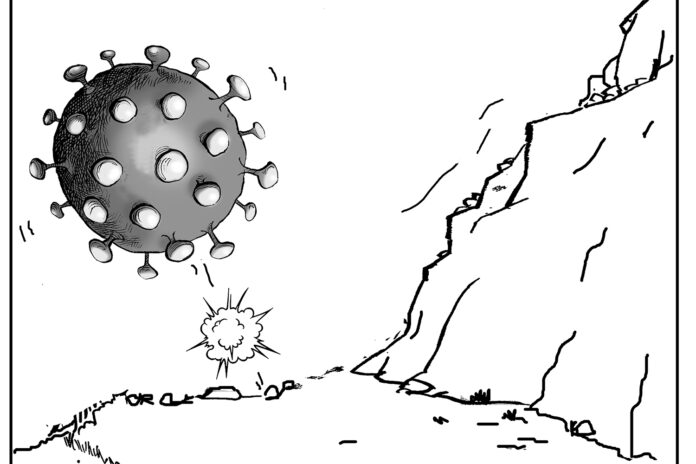 We live in a world where the average sheeple (human mass) is a mere spectator in the scheme of things global. This is not altogether unexpected, as the sheeple is hardly inclined to understand the hidden agenda of the prevailing lopsided globalization. Even in the best of times, inquisitiveness was never the sheeple’s forte. On the other hand, the ruling elites’ objective of bamboozling the gullible sheeple into complete submission continuous unabated. If truth and facts defy fitting into the narratives of the rulers, they would be promptly discarded. However and through out the ages, there were some pro-sheeple thinkers, who volunteered to do the heavy lifting of analyzing, investigating and interrogating to un-fathom truth & facts, particularly in times when the ruling elites were determined to go off on a tangent, like today!
The year 2020 can be considered a watershed in the (collapsing) modern world system. At this juncture, it is advisable to carefully look at the various developments that are now in play. The first thing to notice is; discourses that do not support the narratives of the status quo are being muzzled, rather strongly. Even the natural sciences have been relativized to support the untenable positions of the current global regime. See the article next column. When controversies regarding the sciences (particularly the life sciences) are raging amongst experts, one can be sure of the existence of a sinister agenda behind the distracting noise. Granted, the descriptive sciences (life sciences) are much more prone to relativize-ation, compared to the more analytical ones (physics, etc.) Nonetheless, when one observes the kind of blatant incongruities that are being thrown back and forth between no less authorities than Nobel Laureates, surely the sheeple cannot remain passive for long. In fact and unlike those ‘good old days’, the sheeple cannot calmly hide in its cocoon, as it will be ultimately impacted by the consequences of the raging conflicted narratives. Examining all sides of arguments, not only about the current plandemic or pandemic (whichever way one prefers to spell it), but about all and sundry, will be detrimental to the future of not only the sheeple, but also all lives on the planet, including the non-human ones! See Shiva’s article next column. Here is a nice and timely suggestion put forward by a Polish author, Monika Wisniewska, in regards to the ongoing vaccine controversy. ‘The vaccine should be tested on politicians first. If they survive, the vaccine is safe. If they don’t, then the countries are safe’!
This column has tried to highlight different perspectives on many of the pressing global issues, going back over a decade. Questioning/interrogating the critical assumptions that make the current world go round remains the paramount objective of this column. In this vein and as the current political economy spins out of control, we contend that critical thinkers delve into the problematic with vigor and honesty. We believe it would be wise to calmly and scrupulously examine potential trajectories, along with colleagues across the planet, with a view to possibly bring some respite to the current situation. It is imperative that intellectuals, not the usual credentialed idiots, but perceptive and inquisitive souls with deep commitments to all humanity confront the chaos thrown at us by the crumbling world system. The social goals should remain; a more humane, more democratic, more egalitarian and more inclusive world order, a la the French enlightenment project (1789). Here is a French philosopher, sharing our frustration, lambasting the intellectuals of his days. ‘European intellectuals had lost the Classical World’s ability to reason dispassionately about political and military matters, instead becoming apologists for crass nationalism, warmongering and racism. And History will smile to think that this is the species for which Socrates and Jesus Christ died for’. (‘The Treason of The Intellectuals’) Julien Benda (1867-1956, French philosopher).
The ongoing controversies within the ruling strata, which used to be an encampment characterized by its suffocating narratives and boringly monolithic ensemble, signal an impending bifurcation, as predicted by the likes of Immanuel Wallerstein (1930-2019). One should recall that when the going was good, there was relative peace amongst the parasitic elites of the world system. But today, as the sheeple becomes increasingly restless (it is visibly hurting), business as usual is as untenable as manna in the sky. We are still bound to our motto; ‘question more and live accordingly’ or in the words of a more eloquent and capable logician/philosopher of the 20th century: “The unexamined life is not worth living” Bertrand Russell.” Good Day!