The Public Procurement and Property Disposal Service (PPPDS) annulled the two milling wheat procurement awards for the purchase of 600,000 metric tons on two different bids.
PPPDS had awarded two companies for the supply of the milling wheat on behalf of National Disaster Risk Management Commission and Ethiopian Trading Business Corporation early November, while both foreign companies have disappeared to come up with the bid performance bond until the deadline of early this week.
PPPDS had awarded Rosentreter Global Food Trading to supply the 400,000 metric tons of milling wheat for Ethiopian Trading Business Corporation.
The grain that procured on the aim to stabilize the market was awarded to the Turkish firm at the cost of USD 76.89 million as per the bid offer opened October 13, 2020.
On the 200,000 metric ton milling wheat bid that opened on October 15, Marthina Mertens Sampl Lebensmittel Handel of German received the award at the total value of USD 40.39 million to supply for National Disaster Risk Management Commission.
However, according to Melkamu Defali, Public Relation Head of PPPDS, both companies did not come up with bid performance until the last minutes.
“As per the bid regulation the Service may take legal measure on the companies for their default,” he told Capital.
These procurements had taken several periods for different reasons, while the recent one has also failed to meet the target.
The six companies that were involved in the 400,000 metric ton bidding are; Green Export CA, Aston FFI (Suisse),Promising International Trading Co, HuytonInc, A plus Importer and Rosentreter Global Food Trading.
On the 200,000 metric tons bid Marthina Mertens, Promising International Trading Co, HuytonIncand, and Aplus Importer had participated.
Experts at the time expressed their concern that the winner may default since it did not have experience on the business in the country, while due to the country bid law, PPPDS did not refrain from awarding the company.
According to experts, Marthina Mertens on the other hand had some experience on the bid participation but they said that they did not remember the company winning such kind of bids in the country in times prior.
Melkamu told Capital that PPPDS may float another bid as per the interest to the public institutions.
Experts claimed that such kind of default costs the country since the price of the grain is increasing globally.
When the bid opened about three months ago, experts commented that the offer was comparably very good when it was measured against the global rate but they expressed their fear that the companies’ offers are unrealistic and may lead to default, which has now become real.
Wheat import costs the country up to a billion dollar per annum and the country has imported the grain for close to a decade and half on the aim mainly to fill the market gap.
The reformist government has announced that the country will cut the import by ample production locally. To meet the target, the government has taken different initiatives including allowing imports up to 560 agricultural equipment on duty free scheme and expanding irrigation that may allow farmers to produce the wheat on non rainy season or more than one harvest.
The government has also introduced a new initiative, ‘lowland wheat production’, which is unique for the country and in last year some harvest was reported from this initiative and this year it has expanded.
This year, the government has targeted to cover 250,000 hectare of land on wheat cultivation on irrigation schemes and so far 90,000 hectare have already been covered.
The Experts view
Experts, who demanded anonymity, expressed their concern for the frequent default on the wheat procurement. They suspect that it may be a political sabotage that targets the government that has been unable to buy the grain, “Such kinds of sabotage have been observed in other countries due to that the government should be alert on these frequent defaults because for about over a year the country has been unable to buy wheat because of the disappearance of bid winners.”
“We observed that bid winners disappear before signing the contract and another time with their bid performance, which forced the government to go through a lengthy procurement,” experts said.
“In the middle of this long process the country lagged to buy the product on time and that may force to use its stock,” they added.
They recommended that PPPDS should apply high bid security bond amounts that shall be at least one USD per ton. “In this case real bidders shall participate on the bid, otherwise if we go on the existed experience it would be difficult to determine if the bidders are real and ready for the business,” they said.
In June, 2020 Gemcorp and PPPDS had signed the award for the supply of 200,000 metric tons of wheat plus 20 percent or additional 40,000 metric tons at the total value of USD 48.8 million. Experts claimed that since then the grain has not been bought except the 80, 000 metric tons that was bought for safety net purposes for the World Bank. 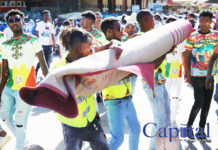 Africa Agenda 2063 How India may deepen its partnership

Gov’t to pay over 200 million birr for cooperative unions