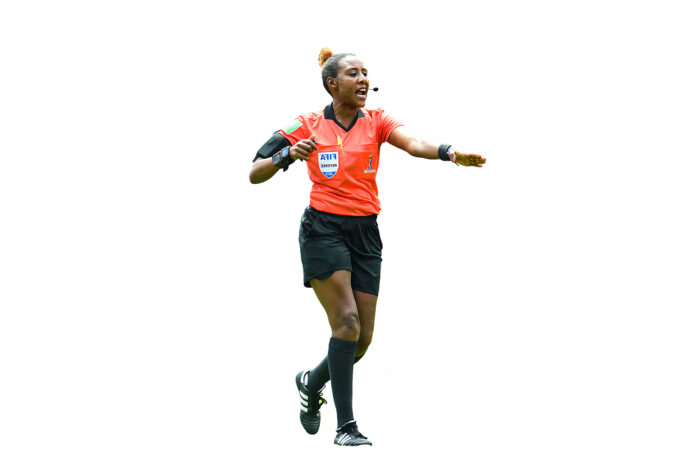 Ethiopian Lidya Tafesse will be the first African female referee to officiate a senior men’s match at the continental level (CHAN). She is the only woman in the continent of 19 center referees who will enforce the Laws of the Game in the 2020 African Nations Championship in Cameroon. Lidya officiated the FIFA Women’s World Cup and the Africa Women Cup of Nations in the past.
Lidya will be leading assistant referees Mimisen Iyorhe of Nigeria, Bernadhar Kwimbria of Malawi and Atezambong Fomop Carine of Cameroon to the scheduled CHAn 2020. According to reports, the referees will be in Younde from 9th to 10th January 2021 for fitness tests and refresher courses. This is the first time a team of female referees including eight from Ethiopia that features in the senior’s men’s CAF tournament.
Lidya who dreamt of being an Ethiopian Premier League referee, had achieved way past that fate officiating the African Cup tournament. Soccer fans who engage in Betway Zambia betting can predict whether Lydia will officiate a particular Ethiopian game.
Lidya has enforced the Laws of the Game in the Africa Cup of Nations for four consecutive years. She was the referee in the semi-final match between South Africa and Nigeria. Also, the Ethiopian Football Federation voted Lidya as the best referee for three years in the women’s and men’s Premier League.
Lidya is committed to her career. She likes promoting fairness in football games. Like other African sports legends, Lidya started from the bottom before she became an international referee. She has faced many challenges in her career. The Ethiopian referee is a role model for many girls. FIFA gave her some costly sports equipment for free but she gave them to underprivileged senior referees. Betway allows African sports enthusiasts to wager on local and foreign leagues.