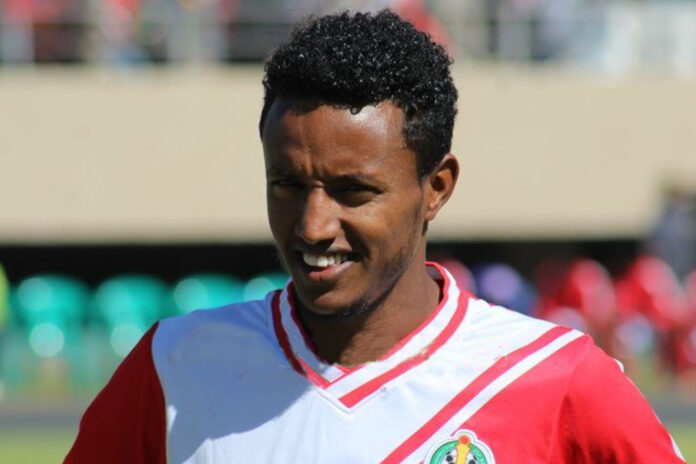 Amanuel G/Michael’s inspirational performance is getting momentum leading his side Mekele SebaEnderta to a famous derby match win on Monday. Amanuel’s solo strike just halfway in to the first half not only broke Welwalo-Adigrat’s unbeaten four matches run but also heralded that the defending champions are serious about retaining the premier league title for the second season in a row.
Though the arrival of 2017 Ethiopian Premier League top scorer Nigerian goal machine Okiki Afolabi was meant to force the young striker leave the club or relegate him in to the reserve bench. Instead Amanuel stayed, battled and succeeded in securing a regular place ahead of the Nigerian.
Yohannes Sahle’s strong defensive line managed to silence the huge Nigerian but failed to stop Amanuel the hero of Monday’s derby showdown.
Joining his former boss at Jimma AbaJifar, Gebremedin Haile, Okiki appears to lose his former marksmanship as he has not yet scored a single goal in five matches to his new club Mekele.
Amanuel’s four goals helped Mekele rub shoulder at the league top spot with crosstown rivals Welwalo that lost not only three points but the service of two of their most important players: team skipper Aynalem Hailu and goalkeeper Abdulaziz Keita. Aynalem is not to return soon for the serious shoulder injury while goalie Abdulaziz misses three matches following an injury time red card.
“Amanuel’s goal is more than a winning goal as it brings a huge confidence among us. We were wary of a slow season start. But now we start believing that retaining the title is possible” Amanuel’s team mate suggested.