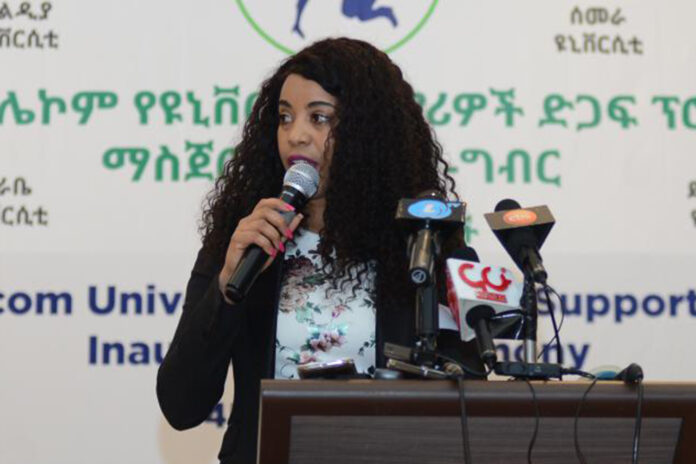 By Ruth Brook
Ethiopia’s sole telecommunications provider, Ethio Telecom, announced the launch of a financial aid program of 16 million birr geared towards helping university students in need of financial support. As part of their Corporate Social Responsibility program, the company’s financial aid will assist 4000 students in 45 Public Universities across the country, in the form of a monthly stipend of 400 birr per student in need.
The inauguration ceremony which took place on December 31, 2019, was attended by university presidents, high government officials and other invited stakeholders.
This program is an extension of an existing support initiative by Ethio Telecom which has aided 840 students from 13 universities since 2006. Seeing the success of this program called for growth, hence the expansion, said Frehiwot Tamru, CEO of Ethio Telecom.
Recognizing that to some 400 birr might not be a substantial amount, Frehiwot voiced that the company has seen the extent to which their funding has helped students in the past. A documentary showing recipient students at Jigjiga University expressing how much the pocket money eased their financial burdens was played, echoing the statement of the CEO.
While assisting students in tertiary education is the aim of this program, Ethio Telecom has previously launched initiatives for students in both primary and secondary education. The company provided a dozen notebooks to each student from 93 schools nationwide, totaling 32,974 students. School uniforms and bags were also provided for more than 5000 students.
The ceremony concluded with university presidents and representatives expressing their gratitude and appreciation to Ethio Telecom for the establishment of this project, many stating that the telecommunications company has a shared vision with the receiving universities.
One such incumbent was Firew Tegegne (Phd), President of Bahir Dar University, who praised the intervention of Ethio Telecom. He expressed that the university noticed the academic performance of female students was 3% lower than that of their male counterparts. He suggested that the reason for this was economically driven and a program such as this one would benefit students immensely. Firew further stated that the university would ensure frequent follow ups on students after receiving the aid.
With a seemingly strong focus on education, Ethio Telecom has also sponsored a six-month fashion design training program for 100 women from the sub-cities of Addis Ababa. The aim is to economically empower them to create a sustainable income, supporting themselves and their dependents alike.
In addition to their philanthropic efforts in the education sector, Ethio Telecom has financially contributed to the Sheger Beautification Project and has supported the Green Ethiopia initiative, with 17,000 Telecom employees planting more than 1.5 million seedlings in 174 areas across all regions.