Seble Hagos was going out holiday shopping at merkato with a list over a meal on Tuesday. The list included many dishes which would require beef and vegetables, but her family’s special request was for doro wot (chicken stew). For this delicacy, she needed onion, butter and chicken among other ingredients.
Since Ethiopia still retains the ancient Julian calendar it has a holiday season in which Christmas falls on 7 January (of the Gregorian calendar) and Ethiopian epiphany January 19 (of the Gregorian calendar). The fast of advent is carried out to cleanse the body and soul in preparation for the day of the birth of Christ. It is celebrated after 43 days of fasting known as Tsome Gahad. Christmas is quietly shared and celebrated in groups of friends and family 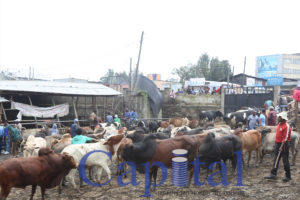 by eating the meat of chicken or lamb or beef accompanied with injera and the traditional drinks. The joy of giving and sharing extends beyond religious beliefs and spreads the spirit of peace on earth and goodwill to all mankind throughout the world.
Unlike sable, many Ethiopians consider the three days before the festival as the best time for shopping, especially for food items, however the preparation for the festival begins before one or two weeks before. As shoppers begin their spree in many markets of the Addis, home to 3.4 million people, the sight was overwhelming. With many rushing to get their last-minute shopping done, some were feeling the burden of seasonal expenses, others exhausted
“The market is doing pretty good this holiday,” for sable a mother of 3 who was shopping for various food items for four hours in merkato and “the prices of butter, eggs, vegetables, red pepper powder and onions have not shown much increase.”
She bought these items from retailers, like Semahegn Yalew, who was preparing his shop in merkato for the holiday market. Suppliers like him get butter, eggs and chicken from various parts of the country, mainly from Harer, Gojjam, Arbaminch and Jimma. He sells an egg for 5.50-6.00 br- similar to the price during the Ethiopian New Year holiday, whereas a chicken would set consumers back between 380 br and 550 br at his shop. Semahegn said “this holiday, the prices, the supply as well as the demand are better.” 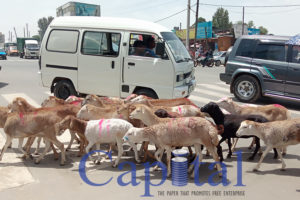 Anyone who passes through merkato on holidays will visit the traditional place butter market, commonly known as qibe tera, a part of merkato, for a traditional butter retailer like Alemayehu, who was selling a kilo of butter for 250 br and 320 br- lots of even if lots of customers complain about the price of the butter there are still lots of customers who specifically look for this because of the quality of the butter.
Stores in Atkilt Tera, the biggest open vegetable market in Addis, was flooded with consumers like Rediet, who came to buy onions. A kilo of onions was sold for 13 br to 16 br almost similar compared to the price last year as well as during the past three holidays. “I believe the price is fair, unlike other times when it soars as the holidays approach,” said rediet, who bought 10 kilos of onions to make her families favorite, doro wot.
Like the onion market, a similar trend was also observed in capital’s biggest cattle markets. Addis Andualem one of the cattle traders at Kera, one of the largest cattle market is waiting the last days of the holiday to warm up the market.
Kera was built almost half century ago. It is now one of the five major cattle markets in Addis Ababa including Kara, akaki, shegole, bercheko cattle markets. It hosts all sorts of customers including those who own butcher houses as well as individual customers.
Even if the market center at Kera has the capacity to accommodate an average of 2,500 cattle and 3,000 sheep and goats at a time according to Addis it is receiving only cattle from different parts of the country, mainly from Harer, Wellega, Bahirdar, Jimma, Gonder and Wolayita among others. 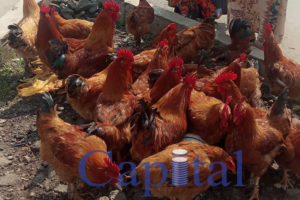 Usually, sale of livestock inside the center reflects significant seasonal variations on demand and supply. According to the traders, usually, the price is based on the type, size and origin of the cattle. In this respect, cattle from the Harari region come up with the highest price with about 35,000 -50,000 birr, while those from jimma and gonder fetches -15,000 birr to 20,000 birr and that of wollega ranges between 20,000 birr to 30,000 birr bahirdar 25,000-40,000 and cattle from wolayta costs the least price in the market between 15,000-20,000.
Fitsum, a friend of Addis says the market is showing 1500 to 3500 birr increase in price in comparison to similar holidays over the years. This is because of decline in supply of the cattle related with the political unrest of the country and even if the situation seems changing quite the price doesn’t.
As Addis said, this season has better supply and demand of cattle will have a direct impact in the price even if the price seems stable and show a downward trend it will boom in the last two days of the holiday until the eve of festivities. Kidane who spent more than 20 years on the cattle trade, he is looking for much profit in compression with recent holidays as he stated the in 43 fasting days the market to cattle shows decline than before so there is better supply of cattle. 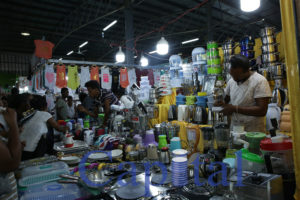 Demand and supply are heavily influenced by the consumer habits connected to religious practices and festivities. According to the traders the kera cattle market is prefabbed because it is close to the Addis Ababa abattoirs enterprise which operates service facilities related to slaughter for meat production with safe, hygienic and efficient livestock slaughter for butchers. According to Shewalefa Yetbarek, director at the enterprise, they are expecting about 3500-4000 cattle and 2500-3000 goat and sheep’s for the slaughtering service on Christmas day. When it compares with last holidays the slaughtering service is declining because of the extent of illegal slaughtering in the city is becoming one of the big challenges causing health damage and damages on the waste product of the cattle’s that the city’s officials choose to remain silent. According to Shewa, the illegal slaughtering shares about 60 percent of the overall slaughtering in the city. Onions, chicken, butter as well as cattle is a welcome sign as the food inflation showed a slight decline, to 20.8 percent in November 2019 from 18.6 percent in the prior month.
Beside the normal markets in recent times huge exhibitions and bazaars are becoming relatives to the city in times of holidays; two exhibitions have been opened three weeks before the holiday; one at millennium hall and one at exhibition center. According to Awgichew Abiye financial & non-financial service manager at commercial nominees and coordinator of the exhibition, more than 290 international and national suppliers and producers are participating on the 20 day exhibition with their different products and more than 600,000 consumers are expected to visit until the eve of the holiday. Beside their price this kinds of exhibitions are use full since they gather consumers, retailers and producers together, said Awgichew. 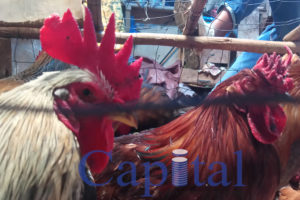 Biruk and his friend Chobe where at the center on the evening of Tuesday December 31, to buy a clothes and gifts for their relatives, even if gift giving is a very small part of Christmas festivities in Ethiopia small gifts are exchanged amongst family and friends at home. The steady prices of products used for gift shows increase in such season. According to the two friends, the price of products at the exhibition is much lower than the outside market “we have bought cotton shirts by 350 birr which is sold more than 650 birr out side.” 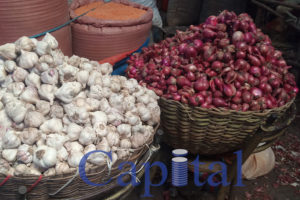 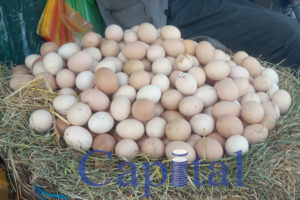 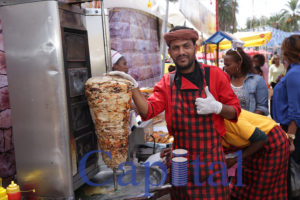 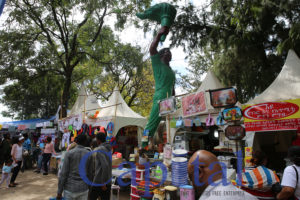 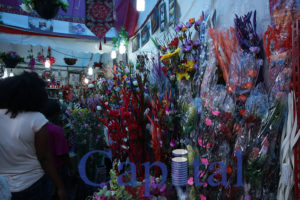 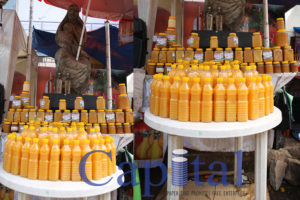