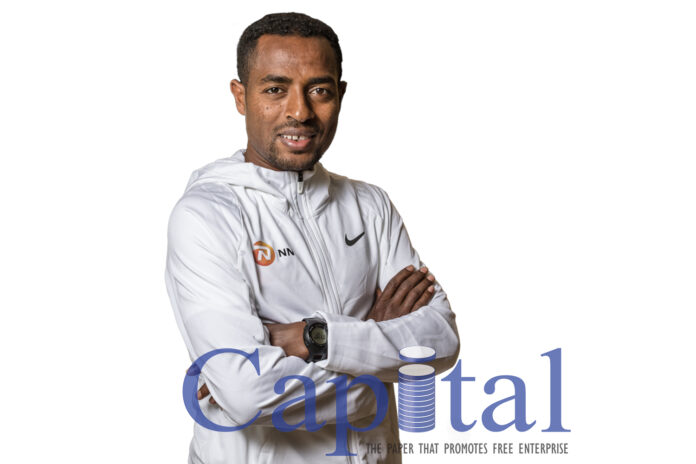 Described as one of the greatest comebacks in athletics history, Kenenisa Bekele’s astonishing victory in September’s Berlin Marathon in 2:01:41 – within two seconds of the world record – sent shockwaves through the athletics world. After years of injury struggles, which can be traced back to a calf rupture in 2010, the Ethiopian has toiled during a stop-start marathon career.
After making a promising winning marathon debut in Paris in 2014 (2:05:04) and giving a glimpse of his outrageous potential with a 2:03:03 clocking to win the Berlin Marathon in 2016 – at the time the second fastest performance in history – his career up until September’s Berlin Marathon was in serious danger of being terminally derailed. Since a second place finish in London in 2017 Bekele has finished only one marathon – when placing sixth in 2:08:53 in London the following year.
Hermens support unwaning
Many dismissed the three-time Olympic champion and world 5000m and 10,000m record holder as yesterday’s man. A great athlete, but one simply unable to produce his best after suffering a catalogue of injuries to ankle, calf, Achilles tendon, back, hips, hamstring and foot. Yet one person never gave up hope or belief – long-time manager Jos Hermens. And earlier this year Hermens and his team at Global Sports Communication sought a solution to enable Bekele to once again flourish.
“His life in Ethiopia is very busy and maybe this wasn’t always the best way of ensuring the adequate rest and recovery between sessions,” explains Hermens. “He is a businessman and, understandably, felt responsible for those businesses. His children mean the world to him and he wants to be the best father and family man he can be. But this sometimes meant he was juggling too many balls with not enough rest in his life.
Temporary relocation pre-Berlin
“We said to Kenenisa: ‘If you keep doing what you are doing you will have the same results. We have to try and change things. Why don’t you spent two months based out of Nijmegen (where the Global Sports Communication offices are based) where you will receive the best medical treatment and can be closely monitored?’”
It was not an easy decision, but Bekele opted to leave his family behind and spend two months in the Dutch city. “Things are not easy for me,” explains Kenenisa.
“I’m not a 20-year-old anymore,” he adds. “My body and training require a different approach. But I still wanted to run a top-quality marathon before I retired. I’m very serious. I’m following my team’s advice and doing my very best.”
The persistent injury issues were the primary concern and such were the nature of his ongoing issues they had created a serious body imbalance. From the moment Kenenisa arrived in Nimegen, the renowned Dutch physio, Peter Eemers, started working on his ankle and hips to rectify the problem. Bekele was given specific gym exercises and his physical well-being was scrupulously monitored.
A return to better quality training
In conjunction with the body strengthening programme, he was also put on a specific nutritional programme with the help of leading Dutch sports nutritional professional Armand Bettonviel.
Bekele had arrived in Nijmegen overweight but with each meal diligently prepared he slowly shed the pounds.
“Back home in Ethiopia, Kenenisa couldn’t get his weight quite right,” explains Hermens. “He was eating restaurant food from his hotel in Addis, but this isn’t the best food for an athlete.
“Armand gave him a diet of simple, plain food, which included proteins, rice and potatoes, vegetables and high-fibre food with support from our partner, Daily Fresh Food.
“Kenenisa gave daily feedback, what he liked and what he didn’t. If he ate too little, we would assess whether this would then have an effect on his training and make the necessary adjustments.”
With his weight under control and the injuries at bay, the emphasis was placed on a strict training programme. Increasing his weekly mileage from a modest 45km a week to 150km during his two months in Nijmegen, he ended his stint there in good shape and set him on the right road to Berlin.
Back in Addis Ababa he continued to apply the principles he picked up in Nijmegen. He successfully maintained the correct balance of treatment and nutrition and having previously trained on his own under the coaching regime of Mersha Asrat he made the significant move to train with a world-class training group which included world marathon champion Lelisa Desisa. Still operating under Asrat’s guidance, Bekele benefited from training each day with top-quality athletes.
“Unlike in Nijmegen, Kenenisa was training one again at altitude in Ethiopia,” Hermens said. “The weather conditions were a bit problematic in Addis because of the rainy season, so we had to be flexible sometimes with training times.”
After delivering spectacularly in Berlin with the second fastest time in history and within just two seconds of Eliud Kipchoge’s world record, the question is: what next? “If you look at the mileage and the quality of training he ran 2:01:41 with minimal preparation,” explains Hermens of Berlin. “Think what could happen in future if he keeps on track with his training.” Hermens underlined.