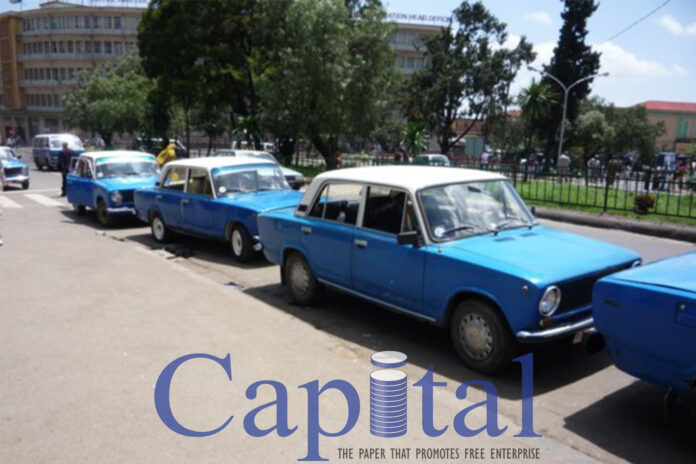 The city administration has begun its action to change the old blue taxis to modernize the transportation in the city. The administration is negotiating with the owners of the old taxis to change them with the new latest taxis and electric taxis.
“The authority has planned to bring 10,000 cabs with 10 billion birr and the city administration will facilitate the finance by a loan secured from the Commercial Bank of Ethiopia” said Meare Mekonnen, deputy director at Addis Ababa Road & Transport Bureau (AARTB).
The authority starts negotiating with the bank to get a loan of 10 billion birr to finance the plan and the bank has given them a positive answer to give the loan, however if the commercial bank loan negotiation failed the authority has set a second option to get a loan from Addis Credit and Saving Institution.
There are tens of thousands of blue taxis registered and known to the Addis Ababa Road & Transport Bureau, of which around 8,097 blue taxi drivers have been registered within the last couple of months to change their old cars. The authority will buy the old cars from the owners and will sell the new taxis to them with long term loan payment with low interest rate.
The city administration believes the reform is needed and will only make the job hassle-free and convenient for both the driver and passengers. The city administration was beginning to recognize the old taxis were no-longer safe or convenient. They appear old and are not reflective of the government’s agenda to change the image of the city.
To many, the old blue taxis represent a battered image of the city as stuck in the past instead of one attempting to transition to a modern and fresher city. The newly imported taxis will be compatible on the often brutal and crowded streets of Addis Ababa, comfortable, safe and their use of technology.
Compared to the vehicles that were used to serve as taxis back in the late 1970s and early 1980s, the blue and white mini bus taxis are the longest in service. Even if their replacement is nearing with the recent announcement of the government’s intention to gradually replace them.
The blue old taxi industry is facing its biggest business challenge to date since the coming of yellow modern taxis which are upgraded with technologies. The reforms that are taking place currently are expected to change this. However according to some taxi drivers in the city, they fear that the city administration will ask them much money than their income.