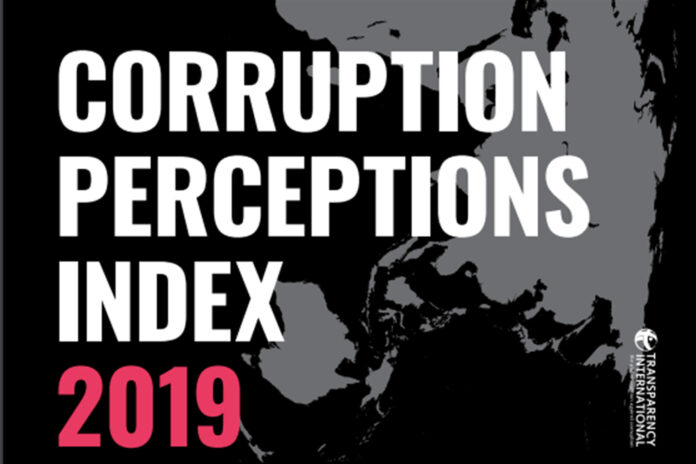 By Ruth Brook
Ethiopia’s corruption levels have seen an unremarkable change in the last year, according to the 2019 Corruption Perceptions Index (CPI) by global anti-corruption organization, Transparency International. The widespread theme of the report was one of stagnation; more than two thirds of countries listed -many of which are among the worlds most advanced economies – have remained stagnant or have experienced backsliding.
The basis of this year’s research is the relationship between politics, money and corruption, the report revealed.
The index ranks 180 countries and territories on a scale from 0-100, with countries scoring closer to 0 labeled as “highly corrupt” and countries closer to 100 as “very clean”. The lower the score, the more corruption the country experiences.
Ethiopia scored 37/100 in 2019, ranking 96th out of 180 countries and territories. The recent score is an insignificant increase from the 2018 score of 34/100, ranking 114th out of 180. Countries are ranked by their perceived levels of public sector corruption.
Data following Ethiopia’s corruption levels have shown that continuous violation of human rights have resulted in the country’s continued low score and have caused “widespread unrest” since 2015. A 2018 report by Transparency International stated that corruption in Ethiopia “ranges from petty to grand and acts as an impediment to its development and further exacerbating poverty.”
Ethiopia’s score is seemingly a reflection of its continents status with the report showing a majority of countries in Africa scoring below 50. The lowest scoring region was discovered to be Sub Saharan Africa with an average regional score of 32/100 which was a stark contrast to the highest scoring region, Western Europe and the European Union, with an average score of 66/100.
According to the results, corruption is more prevalent in countries where large sums of money seamlessly flows into electoral campaigns and where the country’s wealthiest have influence over the governments decision-making.
Since 2012, only 22 countries have significantly improved their CPI scores, in the same breath, 21 countries have seen a significant decline in their scores since 2012.
The 34 page report concluded with recommended solutions by Transparency International for countries and territories suffering from low scores. Among the recommendations are strengthening electoral transparency and integrity, empowering citizens to exercise their voices, monitoring political financing of campaigns and reducing unnecessary influence in policy-making.
Transparency International is a nongovernmental organization, based in Berlin Germany, which seeks to combat global corruption. The first Corruption Perceptions Index launched in 1995, two years after the organization was founded. Transparency International is now present in more than 100 countries, working “relentlessly to stir the world’s collective conscience and bring about change.”