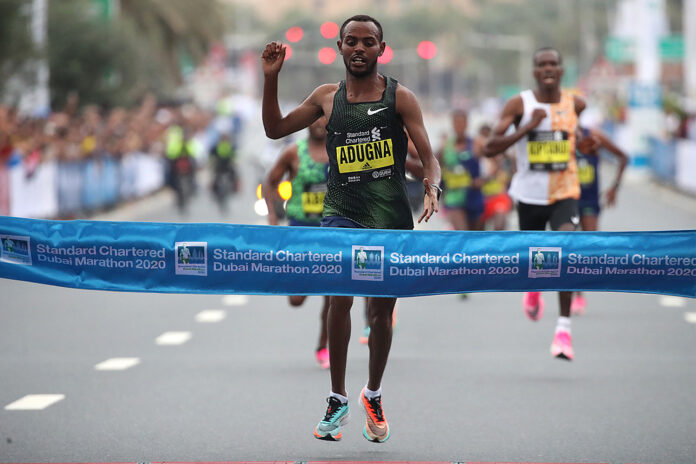 Worknesh Degefa made it a Dubai double with victory in the 2020 Standard Chartered Dubai Marathon today (Friday) as debutant Olika Adugna won a dramatic sprint to the finish in an historic men’s race.
Degefa, the winner in Dubai in 2017, produced the top performance of the day clocking a fast time of 2:19:38 leading from start to finish.
But while she was well ahead and running on her own in the women’s event, the men’s race had a spectacularly close finish with Adugna the surprise winner in 2:06:15 as the first four runners crossed the line separated by just three seconds.
And for the first in marathon history, eleven runners clocked times of under 2:07 – a record that had stood since the 2012 Standard Chartered Dubai Marathon when ten runners finished under 2:07.
The pace in the men’s race was not quite as fast as expected mainly due to the weather conditions. In relatively warm temperatures of around 20 Celsius, overcast skies and a little breeze, a leading group of 24 runners reached the half way in 62:43.
There were still eleven runners in contention for victory with just 2km to go. In what looked like the finish of a middle distance track race, 20 year-old Adugna edged out another debutant as Kenya’s Eric Kiptanui finished second just two seconds adrift in 2:06:17. Tsedat Abeje took third while fellow-Ethiopian Lencho Tesfaye was fourth with both runners clocking a time of 2:06:18.
“I felt very good and always believed I could win,” said Adugna, who continued a winning streak of male Ethiopian athletes in Dubai that stretches back to 2012. “Of course I’m delighted I was able to do it in my debut race at the distance.”
In contrast to the men’s race, Degefa enjoyed a wire-to-wire victory passing half way in 68:36 and was set to beat the course record of 2:17:08. Unfortunately, Ethiopia’s fastest-ever female marathon runner could not keep her pace in the second half of the race. 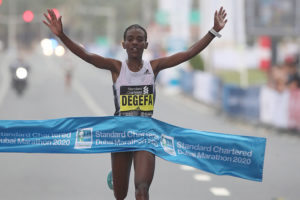 But the 29 year-old pre-race favourite – who clocked a national record 2:17:41 in Dubai just twelve months earlier – remained well ahead and achieved a sub-2:20 time for the third time in her career. While Degefa finished in 2:19:38, fellow Ethiopians Guteni Shone and Bedatu Hirpa took second and third in 2:20:11 and 2:21:55 respectively.
After receiving her trophy from HE Mattar Al Tayer, Vice Chairman of the Dubai Sports Council, and Rola Abu Manneh, Standard Chartered UAE CEO, Degefa revealed she suffered a recurrence of a back problem during the race.
“I had this problem a week ago and unfortunately it returned during the race,“ said the diminutive Ethiopian, who needed medical attention at the finish. “It’s true I wanted to run a much faster time but at least I’ve won the race despite the pain.“
In the wheelchair division, there were victories for Marcel Hug and Sandra Graf with both Swiss athletes making it a hat-trick of victories on the flat and fast streets of Dubai. Hug held off a determined challenge from Zhang Yong of China to win by just one second, while Graf had a less dramatic race to the tape, winning by just under two minutes from Brazil’s Vanessa De Souza.
Around 25,000 entered the 21st edition of the Standard Chartered Dubai Marathon with runners spread across the Marathon and the associated 10km Road Race and 4km Fun Run.
Held under the patronage of HH Sheikh Hamdan bin Mohammed bin Rashid Al Maktoum, Crown Prince of Dubai, and under the aegis of the Dubai Sports Council, with Standard Chartered as title sponsor, the Dubai Marathon is also supported by adidas, Dubai Holding, Masafi, Channel 4 Radio Network, Dubai Municipality, Dubai Police and the RTA.