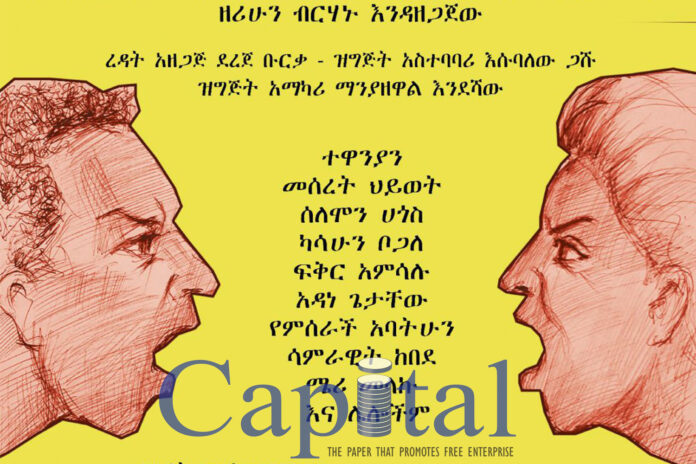 Filumena Marturano a new theater was premiered at the Ethiopian National Theater on Thursday January 23. The theater is translated by Ayalneh Mulatu to Amharic from its Italian version ten years ago and it was given to educational institutions by the Italian Cultural Institute.
After ten years Zerihun Berhanu a lecturer at the Addis Ababa University produced the play.
The play was written in Neapolitan by playwright Eduardo De Filippo (1900 – 1984) in 1946 and later made into a film, known to English speaking audiences as “Marriage Italian Style.” The legendary celluloid pair Sofia Loren and Marcello Mastroianni starred in the film version in 1964, with Sofia Loren playing Filumena.
The memorable story of “Filumena Marturano” begins when Filumena’s partner of 25 years, a wealthy businessman in his mid-fifties, discovers that his common law wife, Filumena, has tricked him into marrying her. Outraged, he seeks an annulment. Domenico Soriano wants to marry his mistress, Diane, a young girl, and Filumena reveals the truth behind her desire to marry him: she wants to legitimize her three out-of-wedlock children and create a family. Domenico has no intention of remaining in the marriage. Filumena accepts the disappointment but then tells him that one of the three boys is actually his. Now he tries to find out which one is his son.