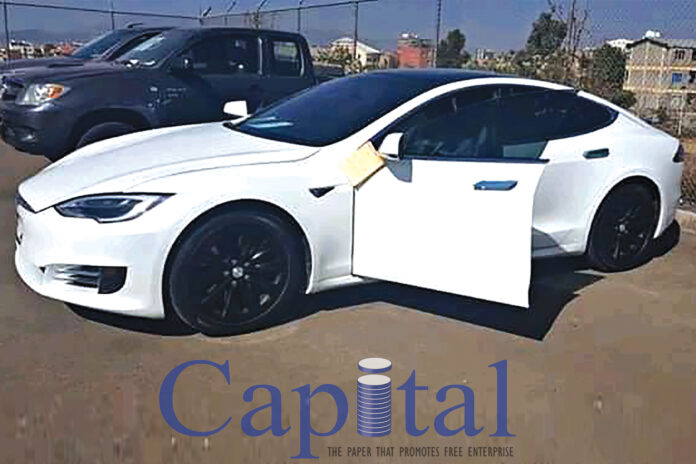 Tesla Model S vehicles up for sale by local importer

Ethiopian importers and assemblers are moving forward in the vehicle industry. Kahinos Car Importer, locally owned import and Trade Company starts to import the Tesla Model S vehicles that are fully electric, to the local market for the first time.
Tesla Model S is known as a phenomenal vehicle and one of the best vehicles in the luxury hybrid and electric models. It is an all-electric five-door lift back sedan with Dual Motor All-Wheel Drive produced by Tesla Inc., and introduced on June 22, 2012.
The model is built with best in class storage, seating for up to five adults and an expansive 17-inch touch screen. Advanced noise engineering creates sound dynamics comparable to a recording studio, while the standard Glass Roof provides a spacious interior experience for every passenger.
Unlike gasoline cars, Tesla cars require no traditional oil changes, fuel filters, spark plug replacements or emission checks. Tesla cars have a powerful battery, which is charged by electricity.
“The battery had enough power to travel 385 miles /600 km/ once the car is charged fully” said Yahunualem Tadesse owner and General Manager of Kahinos. “This model is imported from Dubai and we have plans to import other models of Tesla to provide for the local market,” said Yahunualem adding that “although foreign currency may be our biggest challenge.” 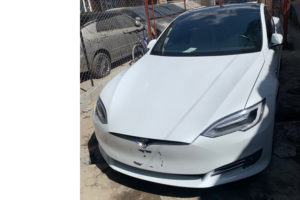 The Tesla Model S vehicles built after October 2016 have the option of an advanced driver assistance system that allows the car to operate without assistance from the driver, but the driver must supervise continuously and take control if there is an issue. This feature is called Autopilot.
The Tesla Model S was the top-selling plug-in electric car worldwide in 2015 and 2016, and by the end of 2018 continued to rank as the second most-sold electric car in history after the Nissan Leaf. The December 2017 Consumer Reports owner satisfaction survey had the Tesla Model S at the top. In 2019, the US magazine Motor Trend named the 2013 Tesla Model S the ultimate car of the year over the magazine’s 70-year history.
A couple of weeks ago marathon motors has also announced to start assembling new models of electric cars in the coming three months.
According to Melkamu Assefa Managing Director of Marathon Motors the newly upcoming car is going to be able to be charged at a house hold level with 220 volt and the car will have the capacity to travel more than 300 km by charging six hours.
In Ethiopia, a country with the lowest numbers of cars in the world at 1.1 million, of which half are located in the capital, demand for cars is high. Out of the total number of cars, 219,699 vehicles are small automobiles.
Certainly it is not common to see electric cars at road of Addis Ababa not even newly assembled cars. Recently the government is moving to revise the Excise tax on luxury and harmful products protect the environment which includes used cars. The Revised excise tax rate draft imposes up to 500% excise tax on vehicles based on their service year
Excise tax on new imported automobiles and semi-electric cars is reduced from 35 to 30 and 35 to 20 percent, respectively, and on full electric cars decreased to 10 percent which is 20 % currently.
Tesla cars, therefore, are relatively expensive to buy. The flagship Model S sedan has a base price of $71,000 not including a $10,000 extended battery or other upgrades and options. However both Melkamu and Yahunualem shares the idea that even if the electric cars price is higher than the cars that use gasoline, once they are purchased there is no need for maintenance and fuel.
“The cars don’t need oil and gas and can travel without any cost for ten years,” said both Yahunualem and Melkamu “It only needs periodic inspection.”