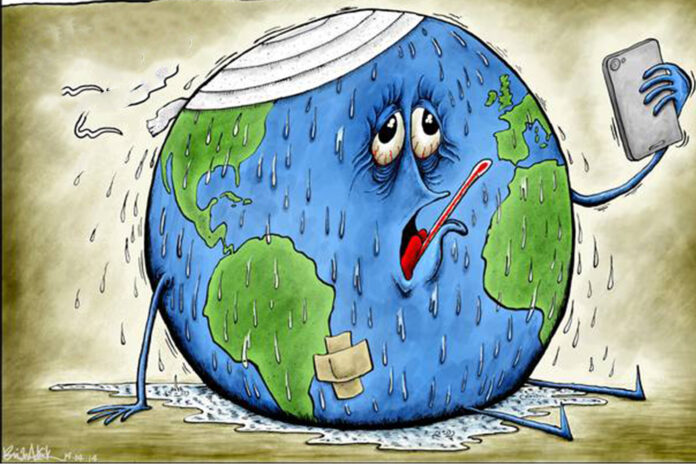 The hypocrisy/phoniness of the modern world system has no bound. The global status quo has a serious problem conveying actual facts and information to the global public at large, especially when these facts/truths are not to its liking. On the other hand, when we have brave souls who dare speak/talk the truth and communicate unadulterated information to the global sheeple (human mass), they end up being persecuted, in one form or another. Dubious allegations and indictments are concocted to undermine, ostracize and convict these individuals. Amongst the well-known truth telling individuals in the rich countries, we can mention, amongst many others, Julian Assange and Chelsea Manning. Since such kosher elements in our part of the world (poor nations) are too many to mention, we leave it to the almighty to have mercy on them, both here and in the heavenly world hereafter! See the articles next column, on pages 33,36 & 38 .
The prevailing global lies are not only about current events or some insignificant temporal matters. These lies also involve foundational principles that underlie the core of the world system in which we live. For instance, the global economic system is based on the shallow and stupid assumption of infinite growth at any cost! This assumption is not only fallacious, but is actually the very germ or seed from which all destructive activities (both to humans and nature) sprout. Moreover, the existing financial system that is borne of fractional reserve banking (FRB) that is running the world system is a bona fide criminal undertaking, sanctioned by the highly compromised capital-favoring inter-states system. In the beginning, the state used to be the protector of collective social existence. It was the prerogative of the state to protect humanity from activities that were deemed damaging and dangerous to collective social existence.When certain unholy inclinations or organizations (within a society) seem to creep up, the state, which was then called the ‘anti-market’, was obligated to take swift action to thwart off the various ascending harmful tendencies. Unfortunately, the modern state today is fully under the thumb of transnational capital, hence is not capable of protecting, neither the citizens nor the larger natural world, from the prevailing greed-propelled modern world system. It is time to take charge; the modern nation state is not and will not be willing to take decisive measures against the prevailing destructive system, no matter what the damage! See Smith’s article on page 36.
Here is another major distortion of fact/truth that dominates the existing world order. This concerns the world of finance. When banks lend individuals money, the banks usually demand some kind of collateral from borrowers. Usually such an arrangement doesn’t apply to the big players of the system, like banks, hedge funds, powerful states, etc. etc. If the borrower gets into trouble, the collateral ends up being possessed by the banks/lenders. In other words, when the going is good, the banks get their interest payments. When the going is bad, the banks foreclose on the collaterals. Lenders/banks are covered both ways. The situation is like ‘heads you lose’ and ‘tails I win’! Therefore and frankly speaking, anyone with loans, mortgage or otherwise, cannot in all honesty claim to own the underlying real assets that are supposedly under their names. Even the notion of equity, which is intended to signify ownership (at least a portion of it), doesn’t really hold water when conditions start to significantly deteriorate. Even if a house that is owned clean and clear (of all loans), the owner of the asset is still potentially liable to government taxes, property or otherwise. If the owner cannot pay the ever-increasing taxes, dues or fees, etc., then the state has the legal rights (formal) to confiscate the asset/property in question! Given all these visible and hidden obligations, can one really say that one owns this or that asset?
What the above scenario illustrates is this; at the end of the day, it is the banks that own all and sundry! The rest of us are mere dreamers, hoping that one day everything will turns out right, with the hope that one day we make good and increase our meager wealth to reach the richness of the .01%! Now this is not the end of it. Just like the local/international banks/lenders (some and tchnically) own anything & everything in a given economy, there is a big bank that owns anything & everything in the world. This is the one bank Nielson talks about. This is the real mega bank that owns around 40% of the world GDP! Unlike us, this bank doesn’t go around boasting that it owns 40% of the world. In fact, it goes out of its way to hide what it actually and truly owns, at least within the framework of global laws. It is only us, small time capitalist cravers, who go on boasting about our tiny wealth, which of course in nothing more than a disguised gratuity of the ‘One Bank’! So what is to be done? For a start, the global sheeple has to start reacting against the obvious destructive measures that are continuously pushed by transnational capital. Secondly, the global mass has to come to terms with its own reality and must stop worshipping the useless make-believe world of the cunny ‘deep state’, as exemplified by the likes of Hollywood, et al. The very belief/recognition that humanity is inherently capable of devising a more saner and equitable world system to benefit all, including the natural world, must remain, per force, as the real specter of the 21st century!
‘There have been three great inventions since the beginning of time: fire, the wheel, and Central Banking.’ Will Rogers. Mimicking Kissinger’s dictum on oil, here is a more comprehensive maxim. “Who controls the food supply controls the people; who controls the energy can control whole continents; who controls money can control the world.” Good Day!