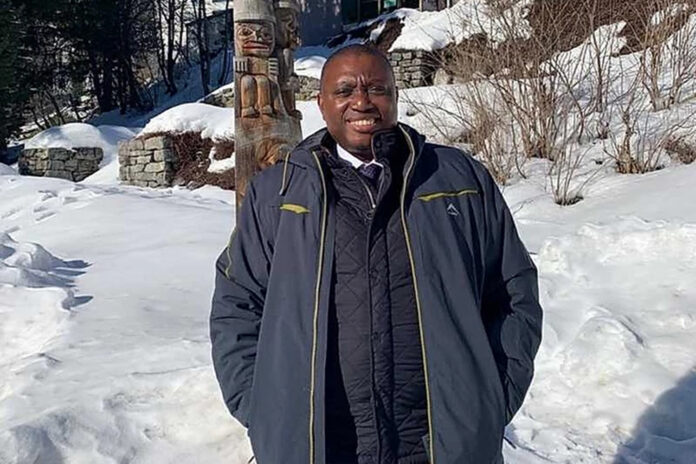 Global leaders from public sector, private sector, civil society and academia met this week in Davos, Switzerland for the 50th Anniversary of the World Economic Forum.  Africa.com has curated hundreds of keynote speeches, panel discussions, focused spotlight talks, exhibits, and sideline events to bring you an understanding of what happened at WEF from the Africa perspective.  The theme this year was Stakeholders for a Cohesive and Sustainable World. The theme addressed the current fractured nature of the international solidarity that has prevailed over the last couple of decades.  The divisive world requires a change in mindset and behaviour in order to reconcile. WEF’s historic role has been a platform where institutions and individuals go to address the economic, environmental, social and technological challenges of a complex, interdependent world.

The theme was addressed in six topic areas:

How to mobilize business and government to act now on urgent climate, water and biodiversity challenges.

How to create a more inclusive and sustainable economy while managing risks for global financial stability.

How to invest in human capital, reskilling 1 billion people in the next decade and reigniting optimism about the equality of opportunity.

How to create a global consensus on deployment of Fourth Industrial Revolution technologies and avoid a “technology war”.

How to transform businesses and markets to target global challenges while navigating technological and political uncertainty.

How to build multi stakeholder institutions that can restore trust, reduce tensions and resolve conflicts in global hotspots.

Below please find our executive editor’s view on the most important Africa-related events that took place at WEF 2020.

#1  The Biggest African Player in the House

The largest African private sector participant at WEF is Standard Bank.  With operations in over 20 African countries, and a market cap of over $20 billion USD, Standard Bank plays an important leadership role in this environment.  We had an opportunity to sit down with Sim Tshabalala, their CEO, and discuss some important questions about how the bank thinks about leadership, sustainability, and its responsibilities to its various stakeholders.

Read or Listen to the Conversation 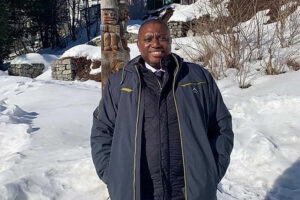 In a panel featuring youth activists, the youngest panel ever assembled at WEF, everyone expected renowned climate change activist Greta Thurnberg to be the shining light among the four speakers.  While Greta, no wall flower by any measure, certainly held her own and reiterated her compelling talking points on the need for urgent action, the surprise was Natasha Mwansa. Natasha stole the show, and had the audience on the edge of their seats to hear her every word.  This eighteen year old Zambian girl has her own foundation, and is a most compelling advocate and activist for girls and women’s reproductive rights. She has used her voice to spark political action to address underfunding of maternal health and forced marriages of young girls. Mwansa explained that young people want more than to simply speak at conferences or become spokespersons for meaningful causes: they want to become partners in political change.

“The older generation has a lot of experience, but we have ideas. We have energy,” said Mwansa.

Twitter was in a melt-down over Patrice Motsepe’s remark to Trump that “Africa Loves You.” Motsepe was invited to a White House hosted dinner at Davos, at which the attendees were approximately 25 global CEOs of companies including Volkswagon, Sony, Shell, Nokia, Barclays, etc.  When asked to introduce himself, Motsepe remarked to President Trump, “Africa Loves You.”

In 2018, Trump referred to the citizens of assorted African countries by saying, “Why do we want these people from all these sh#thole countries here [in America]?”  He has not renounced that statement, and many in Africa remain offended and puzzled at Motsepe’s unqualified praise for the person who referred to Africa in those terms.

While some came to Motsepe’s defense, there didn’t seem to be agreement on the issue. 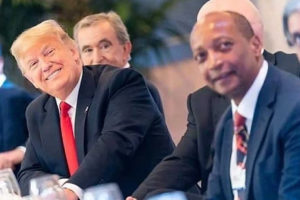 Patrice Motsepe and his wife Dr. Precious Moloi-Motsepe, the newly elected Vice Chancellor of the University of Cape Town, hosted several events showcasing the success of their work through their Motsepe Foundation.  Five years ago, The Motsepe Foundation, headed by Dr. Moloi-Motsepe, joined forces with the Schwab Foundation, founded by WEF founder Klaus Schwab and his wife Hilde. The work of the two foundations is centered around social entrepreneurship – they support people who are developing innovative business models delivering social or environmental good.  The Motsepe Foundation’s contribution marries Dr. Moloi-Motsepe’s affiliation with the Harvard Kennedy School of Government by funding an executive education component for Schwab social entrepreneur awardees at the Kennedy School. Many social entrepreneurs have been acting instinctively, doing what they felt was right, until they experience the Harvard Kennedy School programme. There, they receive academic input, training, exposure and peer learning; it’s an important continuous learning opportunity for them.

#5  Ghana – the African Economy to Watch

At previous Davos meetings, the economic darlings have been Nigeria and South Africa, the two largest economies on the continent.  With each country dealing with its own domestic political and economic challenges, Ghana took center stage as the African economy to watch at this year’s WEF.

The presidents of Nigeria and South Africa quite conspicuously did not attend Davos this year.  However, Ghanaian President Akufo-Addo was in attendance along with a strong delegation of his economic team.  President Akufo-Addo declared that the programme of economic recovery that his government put in place when he was elected three years ago, has been highly successful.  He delivered a large number of data points to support his assertion, including the following:

The President continued, “Generally, the growth, of course, has grown from an average of 3.6% to an average of 7% in the last 3 years. You see an economy that has somehow reversed the decline, and is moving on an upward trajectory. It has also meant that these improving economic indices have us touted as the country that receives the largest investment in the ECOWAS/ West African Region.”

Africa.com had an opportunity for an exclusive interview with Ghana’s Finance Minister, the honorable Ken Ofori-Atta.  Minister Ofori-Atta, who holds a bachelors in Economics from Columbia and an MBA from Yale, is the founder of Databank, one of Ghana’s leading brokerage and asset management houses.

#6  One Woman’s Urgent Message to Davos

For the world’s most vulnerable, climate change is not a distant existential threat: it is killing people right now. Hindou Oumarou Ibrahim, President of the Association for Indigenous Women and Peoples of Chad, gave a powerful reality check.

‘In my region people are dying because of climate change’

In the video below, Hindou Oumarou Ibrahim explains what it’s like to live in a place where the effects of climate change are already being felt.

Part of what makes Davos spectacular is access to knowledge.  One area of knowledge is the latest technological innovations.  In this regard, our Executive Editor, Teresa Clarke, had a chance to demo what is being called Deepfaked.  Deep Fake is the use of artificial intelligence to learn how a person’s face moves with speech and expresses emotion.  In this fascinating video, a live stream of Teresa’s face transformed into the face of various famous people including Theresa May, Michelle Obama, Will Smith and George Bush.  This technology introduces many possibilities, and many more challenges.

Bruktawit Tigabu Tadesse gave a talk on the work that she is doing with her husband to educate Ethiopian children on a mass scale.  She was originally a primary school teacher in Addis Ababa who has now developed Whiz Kids Workshop, a multimedia enterprise that delivers programmes such as “Tsehai Loves Learning,” a television programme for pre-school children.

Began professional career as a primary school teacher in Ethiopia’s capital, Addis Ababa. Determined to improve the conditions of children in the country, looked for ways to educate children on a mass scale. In 2005, with husband, co-established the educational multimedia enterprise Whiz Kids Workshop. Working from their living room, using sock puppets, computer graphics and their own voices, began producing Tsehai Loves Learning, the first educational preschool television programme in the country. Whiz Kids Workshop went on to develop further programmes and win numerous international awards such as the Next Generation Prize at Prix Jeunesse International (2008) and the Japan Prize International Contest for Educational Media (2008, 2009). Named a Rolex Young Laureate in 2010 and one of Fast Company’s 2012 most creative people in business.