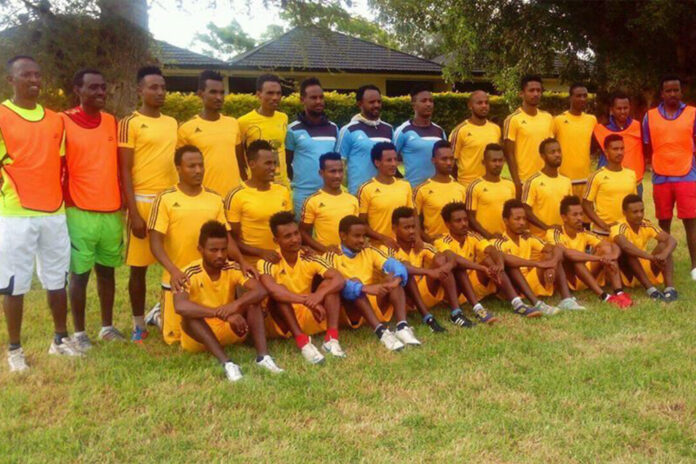 A dream victory at home over visitors Ethio-Electric, Legetafo-Legedadi is in command of Super League group (B) driving seat five points clear of second place and a game in hand Woldya Ketema. Three defeats in a row Electric has slipped down to seventh place with its dream to return to the upper tier changing in to a nightmare.
Three defeats including the latest 2-1 away loss to top table Legetafo, Anwar Yasin’s ball possessing football is proved to be a failure. As for Electric it is seven points behind the leaders siting seventh in the table with nine points from eight matches.
Though its annual budget is said to be nearly eight times than the ten million birr Legetafo gets in a year, Electric is hardly a side in strong contention of promotion. “Having no battle hardened players in the squad, no way Electric could promote to the upper league” a former national player suggested.
Legetafo leads the group race with 19 points from nine matches while formerly a premier league side Woldya is second with three points down followed by Wello Kombolcha collecting 14 points from eight matches. Three wins, three draws and four defeats Electric is 7th with 9 points that is just two points clear of relegation zone.
In other matches Habtamu Demu’s final minute goal gave a game in hand second place Wello-Kombolcha a much deserved win to help the side stay close to leaders Legetafo.
“One need to forge a squad from battle hardened veteran players in order to win. It is impossible to get past the cutthroat dramas at the super league with softer heart double pass crazy youngsters like Electric under Anwar Yasin.” one of the half dozen coaching staff members underlined.
According to close sources the blaming game is also underway with the coaches accusing technical directors, the directors complaining on the club manager and the manager blaming the club’s president for huge interference in the day to day affairs.