The construction of a new gymnasium valued at 1.2 million euros and a visit from the President of Ethiopia were among the many highlights for Lycée Guebre-Mariam’s (LGM) 70th anniversary celebrations, which came to a close on February 7th 2020.
The reception, held on campus, reflected the international Ethio-French school’s longstanding history in Ethiopia with students from all year groups present alongside Alumni; one of which did not go unnoticed, the President of Ethiopia, Sahle-Work Zewde.
Upon the President’s entrance, a procession of students, teachers, alumni, media and officials followed her to the new gymnasium in excitement, with shouts of “Madame la Presidente” being heard from all angles. Once in the new facility, national anthems of both nations were played and what followed were a series of speeches. 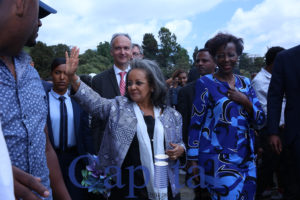 Referring to the changes the school is about to embark on in his speech, Jean-Luc Raguz, Headmaster of LGM, discussed the financial fluctuations that the school has experienced over the last decade and the future endeavors it plans to embark on.
“We are just getting started. We are currently pursuing a very ambitious program of renovation of the property. The buildings will be completely modernized and reorganized within 3 or 4 years. The expected cost for the full renovation of the buildings will rise to approximately 12 million euros, paid by the Mission Laïque Française (MLF), which is determined to improve the quality of service.”
“Our ambition is clear: we want to envision a future for our school that will align with the major challenges of the next decades. I strongly believe that further innovation is needed in space management as well as educational plans and means.”
The gymnasium has two large halls and can host up to five classes at the same time, it has been operational since December 2nd 2019. Additional funding from MLF is needed to build an artificial structure for climbing practice, said the headmaster. LGM hopes to have that started by next spring, he added.
Lycée Guebre-Mariam opened on March 1, 1948 by His Imperial Majesty Haile-Selassie in collaboration with the French Government, through the MLF. It was described during the reception as being the heart of French-Ethiopian relations for many years. 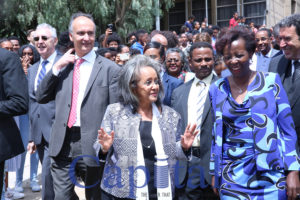 “We are not trying to freeze our school in its prestigious past; we want to come up with a plan that will make of this school a leading institution that will honor its history and build up a future where students will be given the best chances. And we think this requires to aim for excellence, cultural diversity and inclusive education,” expressed the Headmaster.
President Sahle-Work concluded the speech portion of the warm reception with encouraging words to students of LGM, addressing the audience in both French and Amharic. Being a former student of LGM, she passionately expressed the importance of language and the doors that the French language has opened for her. She reminded current students of their advantageous position as students of the esteemed institution and motivated them to diligently purse their studies.
Closing the curtain on the joyous occasion was Ethiopian a cappella group Merewa Choir, who serenaded the wide audience with a cappella tunes in English and Amharic. 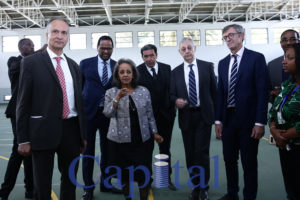 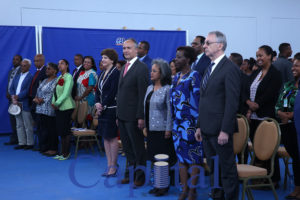 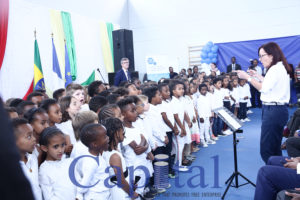 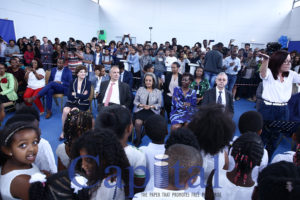