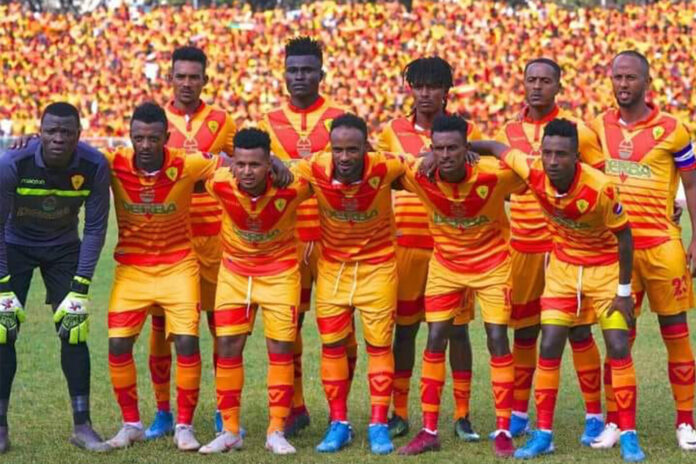 Three wins including the latest 6-2 home demolition of strong visitors Sidama Bunna, record Ethiopian champions Saint George roared in to the league top table for the first time this season. With six wins, five draws and one defeat, Saint George leads the table with 23 points despite missing their best player, striker Salhadin Said and defender Aschalew Tamene for serious injuries.
Back in to good form Getaneh Kebede and rising goal hunter Abel Yalew each with a braid, Saint George appeared to rediscover itself under the Serbian coach who had been booed by team supporters in recent weeks.
It is not only because of the win the Horsemen leaped in to top table but to Mekele SebaEnderta’s 1-0 away defeat to Fasil Ketema.
For the first time this season the defending champions lost in two consecutive matches at home to Wolayta Dicha and away to Fasil Ketema last weekend.
Many expected the dream partnership between Amanuel G/Michael and Nigerian Okiki Afolabi could help Mekele retain the league title for a second season. But the chemistry appeared not to work out thus Mekele slipped to third place behind Fasil Ketema.
Though six wins, four draws and two defeats to collect 22 points to sit second in the table, Fasil supporters heavily booed coach Seyoum Kebede accusing him of playing unattractive football. Even long time club president Habtamu Zewale who is considered the corner stone of Fasil since its inception was to resign following the booing from supporters.
Many including veteran football fans suggest that the title race is just started as the three teams are the real title contenders. “I think the title battle is between Saint George and Mekele with Fasil the outsider” a fan remarked.