Some 23 local and international companies including global influential players are engaged in the production or exploration of gold in Tigray region.
The region that is located in the northern part of the country has enormous potential for the precious metal and other base metals.
According to Fisseha Meresa, Licensing Director at Tigray Mining and Energy Agency, the gold deposit is available in many part of the region, while it varies from place to place regarding the potential.
“So far the gold deposit is available in 21 woredas from 34 woredas,” Assefa Girmay, Senior Geologist at the Agency told Capital.
Prospecting the precious metal in the region is growing and the activity of local and foreign investors has reached 23. 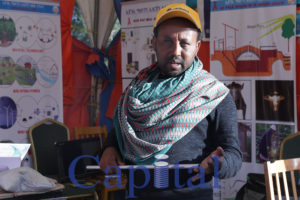 “From gold to quarry mining sector so far 1,200 licenses were given in the region to explore/develop the mining resource of the region,” Fisseha told Capital.
In the gold sector Ezana Mining Development is engaged in production and for the year it has supplied 2.7 quintals of gold for the National Bank of Ethiopia.
Dawit Gebregziaber Abrha Gold Mining Enterprise, which is engaged on a small scale, Newmont Venture Limited Ethiopia and Harvest Mining have secured the mining license that is given by Ministry of Mines and Petroleum, which is responsible to overlook some high level investments in the sector.
According to the Licensing Director, 19 companies are engaged on exploration for the precious metal, which will contribute to the hard currency earning of the country.
“Even though there are some delays in few companies, most are expected to commence production after securing production license and transferred from exploration to mining,” he added.
Besides the big investors, artisan mining also expanded in the region as well as new resource areas were found.
So far 700 associations including over 10,000 artisans are involved in small scale gold mining in the region.
“Meanwhile the stated number is formally licensed miners, the number of artisans is more than this since they operate informally,” Fisseha explained.
He said that the informal activity affects the country because they usually use the contraband business. The agency estimates that the average annual production of the artisans is over 10 quintal in total but the issue is to bring it to the formal trading.
The region has also resources like sapphire and copper that is expected to benefit the communities.
The industrial mineral is also the other huge potential for the region. Iron ore, granite, limestone, quartz, gypsum, silica sand, dolomite, feldspar and others are mentioned as wide potential in the region as industrial product. 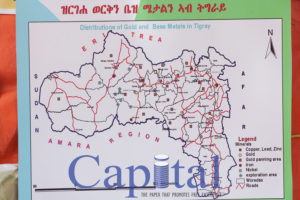 According to Assefa, six companies are engaged on iron ore exploration.
From the industrial material the silica sand resource is very wide that attracts five companies including Goda Bottle Factory that is constructing its factory at Adigrat.
Goda is in good position to commence the production of bottles that would be good opportunity for the region and the nation, according to Fisseha.
“Others are also on the exploration work to establish their industry for the bottle industry that is mainly focus on import substitution for several packaging industries including breweries,” he added.
Construction resource is also available in majority part of the region. Dimension stones like marble, slate and others are abundantly available in the region.
“Currently the mining industry in the region is dominated by the construction and mining sector. For instance regarding the production of quarry crushing there are 150 centers in the Meqelle cluster,” Fisseha said.
He added that the production of construction materials in large scale like cement and granite industries has replaced the import of construction input in the country beside the benefit for job creation and royalty from the mining sector for the region.
Currently the mining sector in the region is creating up to 40,000 new jobs every year.