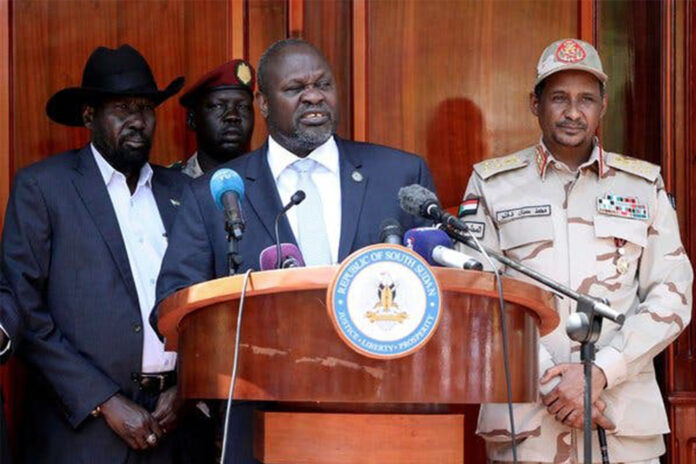 South Sudan forms a new national unity government which includes both the leading party and the oppositions. The government of President Salva Kiir Mayardit has formed a new unity government cabinet, which includes the opposition Riek Machar.
On the 14 February, 2020 the presidency of South Sudan has held meeting on the sticky issues of the number of states and boundaries in the revitalized agreement on the resolution of the conflict in the republic, and the mater to revitalized transitional government of the national unity and the presidency decided to dissolving the states and form a unity government on February 22, 2020.
On Tuesday February 19, 2020, the president has dissolved the old cabinet to make way for opposition members and replaced by new cabinet on Saturday February 22, 2020. Under the new cabinet the opposition Riek Macher will work as the first vice president of the country on his former position of the before he left the country.
South Sudan, the most recent sovereign country with wide spread of recognition got independent from Sudan in 2011, starting from 2013 a political struggle broke out between president Kiir and his former vice Machar which cause a civil war in the country.
There are expectations that the new deal will bring an end to the South Sudan’s six year civil war, which has killed more than 350, 000 peoples and left millions in poverty and to migration, widespread abuses such as the recruitment of child soldiers and sexual violence.
“The people are suffered enough, new formation will bring peace to our people; we need to live in peace no more war”
In 2016, the two government has been formed a unity government which only lasted for three months.
The other issue which the government makes is decision to return the country to ten states and their previous respective counties and three administration areas named Abyei administration area, Ruwang administration area and Greater pibor administration.
When it gained independence from Sudan in 2011, South Sudan had 10 states, as set out in its constitution. Kiir increased that in 2015 to 28, then later 32.
“This is because of the subject matter and in the interest of peace and stability, in the country,” said Ambassador Devid Dang, the deputy head of the mission of the embassy of the republic of South Sudan in Ethiopia.
According to the South Sudan embassy in Addis Ababa, after the meeting the president has direct the ministry of justice and constitutional affairs to effect these legal changes immediately.
Kiir and Machar are under increasing international pressure to resolve their differences until February 22.
President Kiir has promised protection for opposition leaders. Machar’s allies had sought assurances about his safety should if he formally return to the capital.
Beside these, the report from the embassy indicates there are also other arrangements put in place to address their concerns.
The president said the final matter of states would be debated once the unity government is formed.