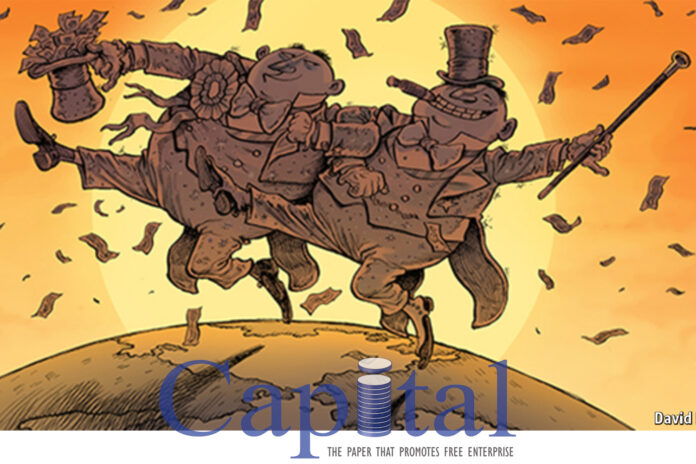 ‘Cronyism’ has become one of the major operating principles of late modernity. We believe it is informative to reflect on the very origin of the word. Like many philosophical ideas, the word ‘crony’ can be traced back to ancient Greece. In the language of the ancient Greeks, ‘Khronios’ meant long lasting, perennial. In the mid 1600s the word became an English slang, compliment of Cambridge University. Deriving its essence from the Greek word, the connotation of the slang became quite clear and popular as well. In the modern world system cronyism is can be described as a substantive involvement with partners in crime!
The more potent and dangerous forms of cronyism involve two areas of modern societies. One is ‘crony capitalism’. The other, we would like to call ‘political cronyism’! The latter might sound a tad too redundant, as politics by its very nature, is ‘partnership in crime’. When the two spheres merge, i.e., the political and the economic, the result is the frightening phenomenon that goes by the name fascism! In the twilight of the modern world system, crony capitalism has managed to undermine the old capitalist virtues of resourcefulness, tenacity, creativity, frugality, probity, efficiency, honesty, perseverance, etc. Cronyism has replaced the above by suspicion, skepticism and outright disharmony amongst people. Unfortunately, institutionalized cronyism is now the norm in almost all nation states of the world system. It seems, without cronyism, modern capitalism will come to a screeching halt!
Crony politics or political cronyism is also one of the main features of modern societies. For instance, what we are currently witnessing in the US electioneering is a good example of political cronyism. In today’s democracy, it really doesn’t matter as to whom the sheeple (human mass) wants to elect. Without the blessing of the deep state, the people’s candidates will not see the light of day! See Hudson’s article next column. There are built-in processes in the system that will allow cronies to thwart off the desires of the masses! In the case of the US, for example, the honchos of the Democratic Party can easily reject the peoples’ favorite candidate and award the nomination to their desired crony! The same applies to the other major party. When such blatant cronyism prevails, one cannot in all honestly talk about a democratic system.
Lighter version of cronyism is also quite common in modern bureaucracies. ‘Favoritism to friends without regard for their qualifications, especially by appointing them to political positions’, is how one dictionary defines this anti-social value of our decaying civilization. Since ‘cronyism’ has become a widely practiced phenomenon in all activities of human engagements, specialized names are now assigned to its various manifestations. For example, the above is ‘nepotism’. It is a word mostly assigned to bureaucratic cronyism, which leverages kinship, etc.
Cronyism and the deep state go hand in hand. Without the protection of the deep state, cronyism can hardly survive. Cronyism can flourish in a society only when the rules of law/justice, etc. are systemically undermined, and for that to happen the input of the deep state is crucial. Granted, we humans are not angels, but that doesn’t necessarily mean our collective existence must be based on our worst dispositions. In fact, in the olden days of hunting/gathering or when intense co-operation was the norm (before industrialization) all those who pushed disruptive agendas, in one form or another, would have been eliminated from society. This was necessary to secure peace and harmony within a society. Today, instead of putting these disruptive psychopaths in jail or in a lunatic asylum, societies at large have decided to reward them with the highest offices/responsibilities!
Nonetheless, this widespread malaise is increasingly facing all sorts of resistance. Some of these grass root resistances have started to take political forms. In both the countries of the North as well as global south, old narratives are giving way to new emerging ones, and situations on the ground are changing fast. On the other hand, the parasitic elites, the beneficiaries of cronyism, have been numbed by their own criminal manipulations and trickery. In fact, they have become oblivious to the simmering mayhems that are now turning all over the world. Here is how the old French economist characterized ‘cronyism’.
“When plunder becomes a way of life for a group of men in a society, over the course of time they create for themselves a legal system that authorizes it and a moral code that glorifies it.” Frédéric Bastiat (1801-1850). Good Day!