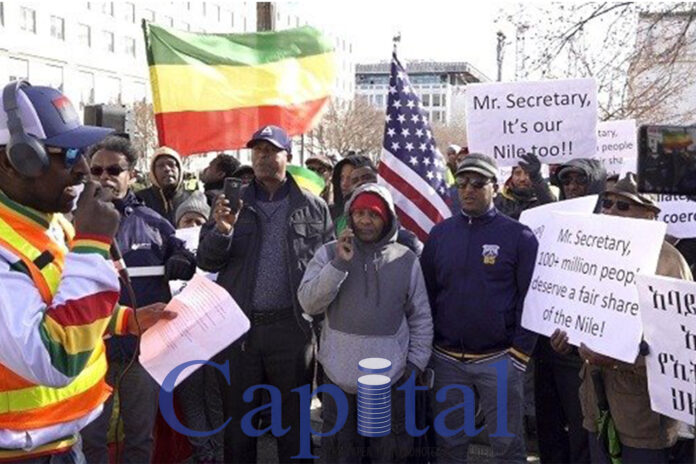 Hundreds of Ethiopians staged a protest rally on Thursday February 27, in front of the United States State Department in Washington D.C.
They opposed President Donald Trump’s government pressure on Ethiopia in the negotiation on the operation and filling of the Grand Ethiopian Renaissance dam (GERD).
“Stop pressuring Ethiopia,” Ethiopians chanted in front of the U.S. State Department.
“Mr. Secretary, 100+ million people deserve a fair share of the Nile,” reads another placard that Ethiopians carried during the demonstration.
These Ethiopians say the Trump administration is putting unfair pressure on Ethiopia to make Egypt get away with Ethiopia’s right to generate electric power from the mega-dam project on the Nile River.
Protesters also demanded the Ethiopian government to make public all details regarding problems in the negotiation.
Those advocating for that position argue that the Trump administration is primarily interested in helping Egyptian leader Sisi to get unfair deals at the expense of Ethiopia.
Ethiopia, Egypt, and Sudan have been negotiating the Dam since November 2019. The United States and the World Bank were present in the negotiation since then as “observers.”
Reports from media outlets who claim to have insider information about the negotiation process indicated that the “observers” are putting unfair pressure on Ethiopia to defend to promote Egypt’s position, which is informed by the Colonial-era agreement to which Ethiopia was not a signatory.
In related development, Ethiopia has asked the United States to postpone what was expected to be the final round of talks on the hydropower dam, it said on Wednesday, delaying the potential resolution of a dispute that sparked a years-long diplomatic crisis.
“We have asked that we need more time for consultation,” Bizuneh Tolcha, spokesman for Ethiopia’s ministry of water, irrigation and energy said, without providing details.
The final round of talks were scheduled for Thursday and Friday in Washington. The U.S. has hosted several rounds of talks in Washington with ministers from the three regional powers and the World Bank after years of trilateral negotiations failed.
Egypt, Ethiopia and Sudan said on Jan.31 they would sign an agreement by the end of this month to end their differences over the filling and operation of the $4 billion Grand Ethiopian Renaissance Dam (GERD).
Ethiopia is building the dam near its border with Sudan on the Blue Nile, which flows into the Nile river – the main water source for Egypt’s 100 million strong population. The dam is the centrepiece in Ethiopia’s bid to become Africa’s biggest power exporter.
There was no immediate comment from Egypt and Sudan.