The European Union shows a strong interest to back African green energy deal in the 10th EU- AU summit held at the African Union headquarter on Thursday February 27, 2020. This is announced by Frans Timmermans European Commissioner for green deal one of the 22European Commission delegation arrived in Addis at Hyatt Regency Hotel.
Ursulas Von der Leyen headed the delegation for the 10th AU-EU summit a partnership that started in 2005 between the two multilateral bodies.
“We come in the largest delegation ever to go abroad which shows a strong sign of interest that we have in Africa,” said Ursula von der Leyen in her opening speech of the meeting held at the African Union headquarters in Addis Ababa on the same day. The talks include a number of issues including trade and security in the form of training, capabilities and surveillance. 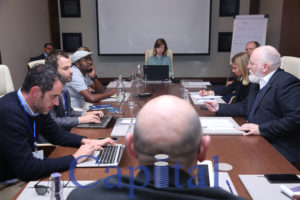 Deepening of AU-EU partnership in the areas of peace and security, climate change; adaptation and mitigation, trade and investment, migration, among others were the main points of discussion during the day long discussion.
European Union is also keen to tap African Continental Free Trade Area agreement as EU is the largest investor and trading partner to Africa, according to the commissioner.
The European Commission head also pledged direct support to the African Union Commission and African countries for anti-terrorism efforts in Africa.
“I am pretty excited of the possibilities to cooperate among the issues important for the successful deal in Europe” said Frans Timmermans.
“Africa is the first continent electrified without coal or a very limited coal,” said commissioner Frans Timmermans adding that working in energy mix is vital.
It is just a good business to do with renewable energy; it is much cheaper, the natural conditions of African nations to exploit green energy such as wind, solar, geothermal and hydro as well also gave a huge advantage.