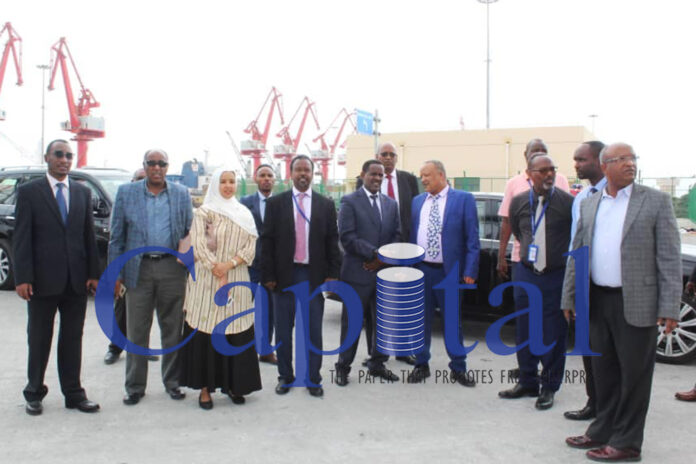 Djama Ibrahim Darar appointed to lead the Ports of Djibouti

A high-level delegation led by Omer Hussein, Minister of Agriculture, paid a visit to Djibouti late last week to see the progress on fertilizer and wheat imports.
On the three days visit that concluded on March 15 the delegation that includes senior officials from the Ministry of Agriculture and Ethiopian Shipping and Logistics Services Enterprise (ESLSE) together with the Ethiopian Ambassador to Djibouti, Abudlaziz Mohammed, visited Doraleh Multipurpose Port (DMP).
Capital learnt that the delegation’s visit was to oversee the good progress of the operation of unloading bulk carriers of fertilizers and grains at the port.
“The visit happened at a time when the flagship of our port infrastructure achieved a new height of performance in this area,” said Djama Ibrahim Darar, General Manager of the Ports of Djibouti SA/ DMP, who took over the Ports’ management since the sudden passing away of the late Saad Omar Guelleh, on October 7 last year.
Djama disclosed that several bulk carriers transporting wheat and fertilizer for Ethiopian farmers have recently docked on the quays of DMP, and said “unloading these ships as quickly as possible to bring the goods to the Ethiopian highlands before the rainy season is one of the priorities of the management of this flagship of our ports infrastructure.”
According to the port officials, as the rainy season in Ethiopia begins in June, to achieve this task, the management and employees of the port are working diligently and the bagging machines installed at the port work at full speed.
More than 500,000 metric tons of bulk goods, mainly composed of fertilizer products intended for Ethiopian farmers, have been dispatched since the beginning of 2020, they said.
The Port received six fertilizer ships carrying 409,708 metric tons since the fertilizer season started in mid-January and 50 percent of the ships cargoes were treated in two months; at least 30 percent (126,095 metric tons) of the above volume was unloaded in the silos, according to the information obtained from the Port.
DMP operations recorded an exceptional performance of 20,000mt of discharging speed on March 9, 2020 for Captain Georgios S. ship docked at berth 5. The port unloaded on average more than 10,000 tons per day depending on the availability of trucks. To date, more than 600,000 metric tons of goods have been handled and DMP silos accommodate over 79,000mt of grain and 8,500mt of fertilizer.
“The increase in port productivity is the result of a very good coordination between the Djiboutian and Ethiopian parties. More than 300 trucks of bulk goods, such as grain and fertilizer products are delivered daily for instance,” the port officials told Capital.
In addition to trucks, a total of 2,590 tons of fertilizer and grains are routed daily to Ethiopia by rail. In each trip, a train carries a load equivalent to 74 trucks. In total, 18 trains have been dispatched to Ethiopia from DMP facility with a total of 45,900mt including 28,400mt of fertilizer in the past few months. The railway operation capacity is currently one train per day and has recorded a performance of loading speed of 24 hour.
Roba Megersa, CEO of Ethiopian Shipping and Logistics Services Enterprise (ESLSE), said that comparing with the past year wheat is being transported in good condition.
“26 vessels are transporting the wheat and so far 13 vessels docked at Djibouti. We are working together to halt port congestion and use the silos properly,” Roba told Capital. The delivery of trucks is also in good condition, according to Roba, while using train is the other alternative to transport the bulk cargo to the country.
“Within three months the train has transported cargos that it transported in full year, last year,” the CEO added.
Roba agreed that if more trucks were available at the port, the port can handle it but as a nation there is shortage of trucks.
“Transporting fertilizer takes time since the product destination is up to the farmer’s door that makes the turnaround time longer, that is one of the reasons to make available more trucks, while the port is now in good position to serve Ethiopian cargo,” the CEO added.
To accelerate the coordination between the two countries, a working committee was created at the bilateral meeting held during the last visit of the Djiboutian delegation led by Aboubaker Omar Hadi, Chairperson of Djibouti Ports and Free Zones Authority, with the Ethiopian team led by Dagmawit Moges, Ethiopia’s transport minister in Addis Ababa at the beginning of the year, which had a positive impact on the transfer of merchandises, according to the port officials.
At the meeting Omer Hussein informed the port officials that Ethiopia intends to export herds shortly and stressed the need to set up an animal park in the Port.
According to the information from the port, the port will soon have a high-end animal park capable of accommodating sheep and goats as well as cattle and camels, fit with drinking water.
Ethiopia has high interest to expand the livestock export that is one of the major commodities that the country loses on the contraband route in every direction of its borders.
Following the passing away of Saad Omar Guelleh, Djama Ibrahim Darar, who served as one of the top management team at the Ports of Djibouti SA for several years, took over the leadership of Djibouti ports facilities.
In his long years of service to the Port of Djibouti, Djama has worked tirelessly to strengthen Djibouti-Ethiopia ties. He has been a constant figure in the bilateral discussions since the establishment of the joint commission set up to help resolve any bottlenecks and ensure a quick and smooth transfer of goods on the Djibouti-Ethiopia corridor.

Djama Ibrahim Darar is appointed Director General of the Port of Djibouti SA & DMP on November 19, 2019 by the PDSA Board of Directors.
He is a senior and experienced executive, holding a postgraduate degree, who has worked at all levels to lead the economic lung of the country, the Port de Djibouti S.A (PDSA) and the new Doraleh Multipurpose Port (DMP) complex.
Djama has served as interim general manager since 2014, and was later appointed Director of Strategy and Public Relations in 2017 and is one of the actors of the establishment and realization of the Port of DMP. 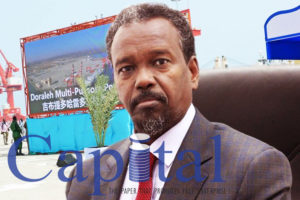 Djama has served in various capacities including Commercial Director from 2008 to 2017, in addition to serving as Director of Operations, a post he served during the period of 2010-2012.
Djama has also assisted the Port of Dakar (Senegal) sharing his long years of expertise gained through almost two decades of working for the Port of Djibouti starting in 2002 as Technical Advisor to the Director General of the Port of Djibouti.
Passionate worker and supporter of lifelong learning, what matters most to Djama is the result. And as such, he worked on various projects including:
The implementation of port certifications: ISO 28000 and 9001.
Active member of the bilateral commission between Djibouti and Ethiopia as an expert.
Active member of the COMESA joint commission as an expert
Active member of the PMAESA commission and other international organizations as an expert.
Speaking in various international forums and conferences in South Africa (Durban, Port Elisabeth…) In Kenya, Mombasa, IAPH world ports in Indonesia, Bali, in Morocco, Casablanca, in Ghana, Accra, in Cameroon, Yaoundé on role of Public-Private Partnership organized by the International Finance Corporation of the World Bank… etc
He is also a former member of the French Institute of Audit and Internal Controls (IFACI), affiliated to “the Institute of Internal Auditors (IIA)” which is located in France, the body responsible for representing the internal audit profession, to promote its development and to serve internal auditors.
Djama Ibrahim Darar is the right man at the right place!