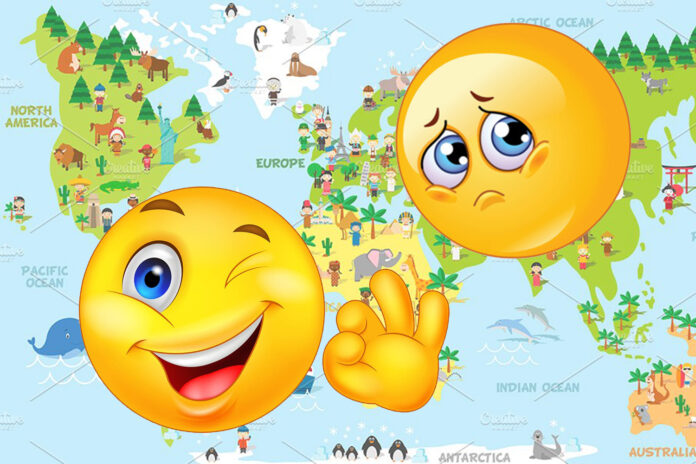 At a time like this—when the coronavirus pandemic is sweeping the globe and has killed over 10,000 people—we need some happy news. The annual World Happiness Report has just been released, timed to the UN’s annual International Day of Happiness on March 20. For the third year in a row, Finland has placed at the top of the list as the happiest country in the world, with Denmark coming in second, followed by Switzerland, which pushed Norway out of the top three this year.
And while it seems like a strange time to be evaluating happiness, the editors of the report point out that challenging times can actually increase happiness. “The global pandemic poses great risks for some of the main supports for well-being, most especially health and income,” the editors explain. “As revealed by earlier studies of earthquakes, floods, storms, tsunamis and even economic crises, a high trust society quite naturally looks for and finds co-operative ways to work together to repair the damage and rebuild better lives. This has led sometimes to surprising increases in happiness in the wake of what might otherwise seem to be unmitigated disasters.”
The reason that people get happier in the fact of disasters, they say? “People are pleasantly surprised by the willingness of their neighbors and their institutions to work in harness to help each other. This delivers a heightened sense of belonging, and pride in what they have been able to achieve by way of mitigation. These gains are sometimes great enough to compensate for the material losses.”
The World Happiness Report is an annual survey by the Sustainable Development Solutions Network for the United Nations. It looks at the state of global happiness in 156 countries, ranking countries using the Gallup World Poll and six factors: levels of GDP, life expectancy, generosity, social support, freedom and corruption income. The World Happiness Report was originally launched in 2012.
This year, things have improved slightly for the United States. The U.S. ranked number 18—a slight uptick from last year when it ranked 19, although it’s still far below its 11th place ranking in the first World Happiness Report. Last year’s report explained it: “The years since 2010 have not been good ones for happiness and well-being among Americans.”
So where did other major countries fall on the list? The United Kingdom was at number 13 (up two spots from 2019), Germany was again at 17, Japan was at 62 (down four spots from 2019), Russia was at 73 (down five spots) and China was at 94 (down one spot).
Besides the happiest countries, the World Happiness Report also looked at the places where people are the unhappiest. This year, Afghanistan was named the unhappiest place in the world, followed by South Sudan and Zimbabwe.
For the first time, the 2020 report also ranked the happiest cities around the world. The top 10 is dominated by Scandinavian cities, with Finland’s capital of Helsinki ranking as the happiest city in the world.
On the other end of the spectrum, the unhappiest cities have some common themes. Most are located in underdeveloped countries and have experienced war (Kabul in Afghanistan, Sanaa in Yemen), armed conflict (Gaza in Palestine), civil war (Juba in South Sudan, Bangui in the Central African Republic), political instability (Cairo in Egypt) or devastating natural catastrophes (Port-au-Prince in Haiti).
The editors of the report say their ranking is different from other city lists in that their report doesn’t just rely on factors that researchers consider relevant. “Our ranking relies on city residents’ self-reports of how they themselves evaluate the quality of their lives,” say the editors. “Arguably, this bottom-up approach gives a direct voice to the population as opposed to the more top-down approach of deciding ex-ante what ought to matter for the well-being of city residents.”
Read on for the top 20 happiest countries in the world, as well as the 10 unhappiest places, the 10 happiest cities and the 10 unhappiest cities. And wherever you are, try to stay happy, despite it all.