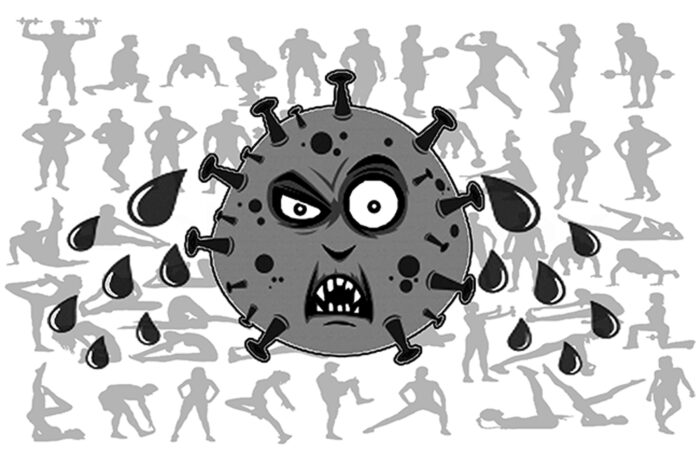 In the precedent article, I briefly explained that Muscles are the main actors of movement. They produce force by contracting. Muscle, due to its physical properties, is classified as a plastic organ but not an elastic one. Muscle has contradictory properties. At rest a muscle has a certain measurable length. When it enters in action, it contracts and gets shorter than its initial rest length. When tension pulls it apart, it extends and its length increases to a certain limit, surpassing the rest length. This is why it is classified as a plastic organ because it can be deformed in opposite directions. An object with an elastic property can be stretched but it will always return to its initial position and never gets shorter.
Muscles produce force and the force they produce is closely related to the size of the muscle. One square centimeter of a man’s muscle can move 6.7 kilograms, whereas that of a woman can move 6.2 kilograms, representing 92% of a man’s performance! The strongest muscle of the human body is the Masseter located in our jaws. It can develop 450 Kg for 2 seconds only. The largest muscle is the big Gluteus muscle which keeps the body upright continuously when we are standing extending our hips. The fastest muscles are the eye muscles. The most enduring muscle undoubtedly is the cardiac muscle which never takes a rest during the entire lifetime of a person.
Muscles play different roles. Most of the time more than one muscle participates to produce force. The main actor of a movement is called the Agonist muscle. Its role is determined by the surface area it occupies in the muscle lodge which is clearly the largest. In order to alleviate the pressure on a single muscle, Mother Nature most of the time has put other muscles at the same location to support the Agonist muscle. These muscles are called Synergist muscles. If an accident occurs on the Agonist muscle, the Synergist takeover the action by replacing the Agonist muscle. For example the thigh is composed of four muscles. One single muscle called the Rectus Femoris (RF), which is visible at the middle of the thigh muscle, can perform the knee extension alone. In reality, all of the four thigh muscles work in unison to extend the knee. When a work necessitates maximum force, muscles located far from the action area contract simultaneously to support the effort. These muscles are called Cooperative muscles. As a muscle never stays contracted eternally, it must return to its initial rest position and relax. This action is performed by a muscle called Antagonist. This is why Exercise Physiologists say that muscles are ruled by the Twin Antagonist Principle. Where there is flexion there is extension, where there is pushing there is pulling, where there is lifting there is dipping, where there is abduction (separating from the center) there is adduction (bringing back to the center), where there is inversion there is eversion and so on.
When a muscle works, it contracts in different ways. Naturally, a working muscle gets shorter in length and swells. It can also contract paradoxically by increasing its length and not getting deformed/swelled. It can equally contract without producing movement. The 1st type of work is called the natural contraction where the angle of the joint shortens and closes gradually. Flexing your elbow is the major work of your Biceps. As the effort is produced, the angle that is reduced and closes shows that the Agonist muscle responsible for flexing that joint is active. If you wish to lower the weight you lifted, you can do it by extending your elbow gradually or immediately; done gradually, it is the muscle that produced the flexion that is lowering the arm slowly and is called the anti-natural movement or negative work. This is the only moment an Agonist muscle can work in the opposite direction Nature had initially programmed it for. Whereas if the extension is rapid or brutal, it is the Antagonist muscle (Triceps) that is working to bring the arm to the rest position. Here, to extend the flexed elbow, the Antagonist muscle needs the passive cooperation of the Agonist muscle which must relax immediately to bring the joint at its natural position. You can also chose any joint and close the angle at a certain degree and hold it for a certain time. Here the muscle doesn’t get shorter or longer because it is fixed at a certain position/angle. Contrary to Physics that determines work by movement, Exercise Physiology characterizes work by the speed of appearance of fatigue which can be immediate, rapid or late closely influenced by the intensity of the effort. The physiological ping-pong game, played between Agonist and Antagonist muscles that contract and relax simultaneously, help movements to be repeated as long as the muscles have enough stocked energy to use. They are the motors that create action.
Depending on the role played by each muscle, a clear difference of force production exists between Agonist and Antagonist muscles. This is called the Agonist/Antagonist force ratio. In the life of an ordinary person, it is not so important to pay attention to this ratio. But when a person practices sport at a high level, it is mandatory to control permanently this difference. Sports develop strength by exaggerating the role of the Agonist muscles, thus creating an imbalance between the two protagonists. I am sure that the readers of Capital have observed sprinters and football players end a competition limping and holding their hamstring muscles. The overuse of the thigh muscles/quadriceps and forgetting to equally develop the muscles located at the opposite side/hamstrings aggravates the imbalance and finishes one day to provoke muscle strain and even muscle tear. You must understand that when an Agonist muscles contracts the Antagonist muscle must instantly relax and if this happens with some microseconds difference, then muscle injury appears.
Remember Health is Wealth