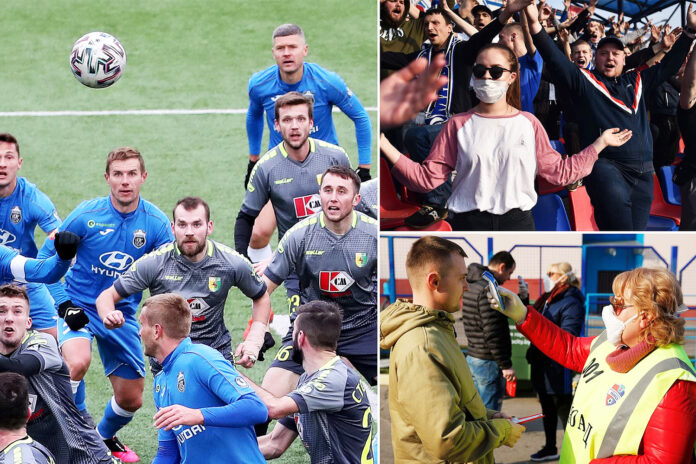 Belarusian football has never known this level of international attention.
The decision to continue playing, when all major football competitions across Europe have been suspended because of the coronavirus pandemic, has made it the go-to for fans craving live action.
The Belarusian authorities have dismissed pandemic warnings as “psychosis” and have not officially enforced a lockdown in the country, with the pro-government media playing down fears about the spread of Covid-19.
That is despite the total number of deaths relating to virus passing 30,000 in Europe, and 43,000 globally.
Belarus confirmed its first death from the virus on Tuesday, but the unofficial number is reportedly a lot higher.
Fifpro, the world union for football players, has said it is “frankly not comprehendible” that games are continuing in the Eastern European nation.
But continue it does, and the Belarusian Premier League – a competition not many had heard about before this spring – is gaining popularity across the world.
Among this international craze, one team stands out.
FC Slutsk – from Minsk Region – had few international fans just a couple of weeks ago.
But despite a mixed start to the season – one win, one defeat – they can now boast of hundreds.
The FK Slutsk Worldwide Facebook group, established in Australia last week, has more than 2,000 members.
“The coronavirus has hit football fans all over the world hard,” says the group description. “We thank the Belarusian Premier League, and FK Slutsk for keeping football going for football fans everywhere.”
What is the secret of such huge popularity?
“FC Slutsk has seen hype due to its name,” explains the popular Belarusian sports website Pressball.
“Slutsk sounds similar to the rude colloquial English word ‘slut’, which means a ‘woman who has a lot of sexual partners’ or ‘women who have a lot of sexual partners’ in plural.”
The website noted that, in the light of this, a senior Russian football official’s criticism of broadcasts of the Belarusian championship on Russian TV appears to be “ironic”.
Commenting on a game he watched, Vyacheslav Koloskov likened Belarusian football to “pornography”.
But FK Slutsk’s popularity knows no bounds at the moment.
Those worldwide fans have come up with a new club emblem, almost 300 comments were left on the page during their recent defeat by Dinamo Brest, and a report in Poland said some Adelaide residents are even pushing for a twin-city relationship with Slutsk.
“We don’t want this extraordinary story to stay just a short-term hype, but would want these fans to stay with the team even after the end of the global epidemic, even when all the world’s football will return from quarantine,” the club told Belsat.
Since the first death with coronavirus was officially confirmed by the traditionally secretive Belarusian authorities, concerns have grown that the football championship may be suspended.
Vitsebsk, where the 75-year-old Belarusian actor Viktar Dashkevich died of Covid-19, is home to the eponymous top-tier club.
According to numerous reports by opposition media, the unofficial number of cases in the city and region is high. Indirectly, even the authorities concede the fact. In particular, the Interior Ministry banned policemen from leaving the region.
But the city’s football team continue to prepare for their next game – on 5 April they host Smolevichy at their 8,000-capacity stadium.
According to Vitsebsk manager Syarhey Yasinski “everything goes as planned”.
“Nothing has changed for us,” he says. “We do not go out, try not to cough on one another, wash and rub hands.”
However, he did voice some reservation.
“So far we do not have any sick players,” he said. “So far everything is fine in this respect. But you should understand: if all this changes, my comments will be different, and so will actions.”
Midfielder Anton Matveyenka appears to be more concerned.
“I am not in the best mood,” he said. “There is rather a feeling of danger nearby. And when everybody is phoning you and asking about Vitsebsk, I feel somewhat uneasy.”
Elsewhere, Brazilian defender Joao William – who plays for Brest-based Rukh – voiced his anxiety in an interview with the Belarusian sports website Tribuna.
“I hope the Belarusian championship will be suspended,” he said. “I am slightly frightened. I am not worried about it during a match. But after the final whistle is blown, doubts arise: ‘Have I contracted it today?.'”
And supporters of another top-tier club, Neman, have accused the authorities of lying about the real epidemiological situation in the country and called on all fans not to attend matches.
“Let us stay home, reduce risks linked to the coronavirus spread and defend ourselves and people next to us,” the Neman fans said in the statement, as well as urging the Belarusian Football Federation (BFF) to suspend all competitions.
For his part, BFF chairman Uladzimir Bazanaw appears to be defiant.
“There is no critical situation. Therefore, we are continuing the championship,” he said in an interview with Belarusian state TV.
“Nobody is putting pressure on us – neither Uefa nor Fifa. We are taking decisions on our own. We are not saying that we are going to play the full championship. If there is a critical situation, we will suspend the tournament.” (BBC)