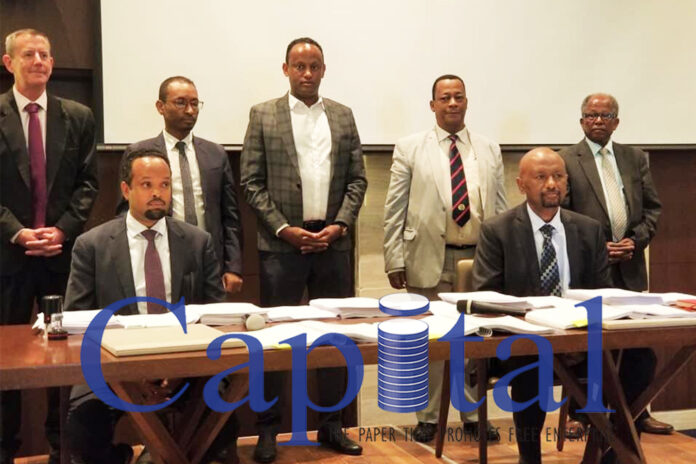 One of the first independent energy company in Ethiopia, Tulu Moye Geothermal operations /TMGO/ signed a power purchase (PPA) and implementation agreement (IA) with Ethiopian Electric Power (EEP), Ministry of Finance (MoF) and Ministry of Water, Irrigation and Energy (MoWIE).
The agreement signed on March 31, 2020 at Hyatt regency, is the first of its kind public private partnership on geothermal power project and power purchasing agreement between the government and private company.
The three government bodies signed the updated PPA & IA agreements to allow the Tulu Moye Project to accelerate progress and investment in Ethiopia.
TMGO was established in December 17, 2017, created for the implementation of this geothermal project making it one of the first independent power projects in Ethiopia. TMGO is a shareholding company of the Paris based investment firm Meridian SAS and the Icelandic Geothermal Development Company, Reykjavik Geothermal.
TMGO, one of the first independent energy companies in Ethiopia kicks off drilling on 4 March 2020 at its project site with the drilling rig on site, the official start of drilling for the Tulu Moye geothermal project at Tulu Moye volcano in the Arsi Zone of Oromia Region, in Iteya District.
The project is to generate and sell the power to the Ethiopian electric power for the next twenty-five years 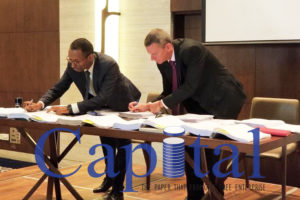 The drilling milestone mark the beginning of the development of 150 MW geothermal power plant in two phases, with an anticipated total investment of USD 800 million and is considered both by the government and project owners as a breakthrough event.
“Geothermal enhances our energy security by providing constant output power to support industrialisation,” Prime Minister Abiy Ahmed said on Twitter, adding that it was the first such power purchase agreement to reach such an advanced stage in the country.
The wells are expected to be drilled by Kenya Electricity Generating Company (KenGen), which signed a contract in October 2019 with TMGO for the first phase of the project. The agreement provides for the drilling of around ten production wells and two injection wells. KenGen will also build a collection and injection system for a water-cooled condensing steam power plant with a capacity of 50 MW. The Tulu Moye Geothermal project brings the preeminent international geothermal scientists to Ethiopia, including from USA, Iceland & Kenya,
By February 2023 the project will start to generating 50 MW on the first phase of the geothermal power-plant. Furthermore, by 2025, the project is expected to generate 150 MW towards the Ethiopian Electricity Grid base-load needsTulu Moye Geothermal will continue to work in the coming years with the technical and financial experts in Ethiopia to develop a leading global geothermal industry, totaling 150MW, the full Corbetti programme will enable the Ethiopia to meet 18% of its 2025 geothermal generation target.