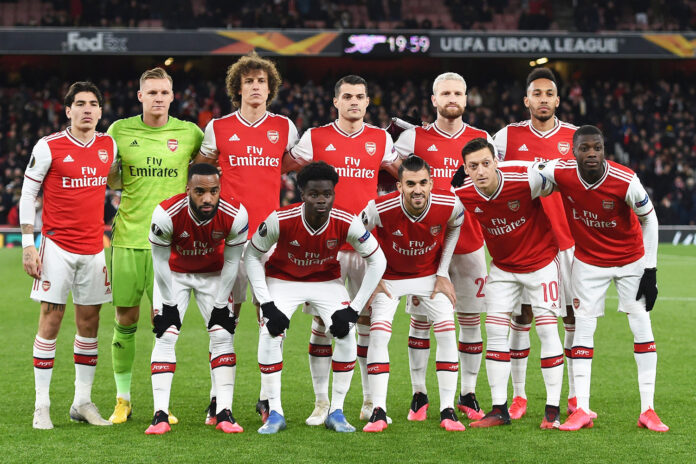 The standoff between Arsenal and their players over wage reductions risks sending an untimely ripple through waters that, after a turbulent first half of the season, seemed to have calmed since Mikel Arteta’s arrival in December.
Arsenal want their players to take a pay cut of 12.5%, which would apply if they did not qualify for the Champions League when football restarts, but that suggestion has been rejected by a significant number of the squad.
Talks are continuing and Arsenal were conciliatory in their summary of the situation presented to supporters via the club website on Wednesday.
“Over the past 10 days we have been in discussions with [the players] around the potential financial challenges ahead and how we are planning for those now,” it read. “These are productive and ongoing conversations about how our players might support their club in an appropriate way.”
A faint undertone could be detected, because the definitions of “appropriate” differ. The suspicion remains that everyone will eventually meet halfway.
The players’ position is that only a deferral will do and, while the Professional Footballers’ Association representative, Héctor Bellerín, is the conduit for negotiations with the club, the soundings being taken generally cement this stance.
One agent with high-profile representation in the Arsenal first team said his position is simple: the solution has to be a deferral and, furthermore, one without caveats relating to the Champions League. Another with interest in the negotiations has the same view, saying anything other than a request for deferral with a fixed reimbursement date for the full amount should simply not be deemed acceptable from a club in the Premier League.
Using a player’s agreed salary as – in effect – a bonus contingent on Champions League qualification was, he suggested, not an honest way to proceed, particularly given Arsenal’s chances of returning to that stage for the first time in four seasons remain slim.
There is clearly some way to go before the situation mirrors that at Brighton, a considerable distance down the top-flight food chain, where Glenn Murray said talks about wage reduction details were “bringing the club together even more”.
Arsenal have a wage bill of around £230m, a huge figure to sustain when European football of any kind may be off the table next season, and there is an urgency to mitigate a state of affairs that “puts our operating model under pressure”.
There remains a sense in some with links to the squad that footballers who already make plenty of charitable contributions should not be taking the hit for billionaire owners.
One of the representatives pointed out Arsenal’s academy has produced several players with first-team experience who are not yet regulars and could fetch eight-figure sums if agreements are formed now for when the transfer market grinds back into gear. That could make up a big chunk of the Covid-19 shortfall. It is an approach that has raised plenty of money before but the club see the potential for greater certainty in their current proposal.
The announcement on Wednesday that Arsenal’s executive team – comprising the chief executive, Vinai Venkatesham, the head of football, Raul Sanllehi, the technical director, Edu and 11 others – will waive more than a third of their earnings over the next year would appear to place the ball firmly in the players’ court. All the executive team are well remunerated but none earn close to a top-end Premier League salary.
The club also made it clear they are “not currently intending” to furlough staff and nor are they considering redundancies.
There is no desire from any party to be caught up in a public relations battle, although the emergence over the weekend of details about such tightly guarded discussions may not have aided the players on that front, given recent sensitivities about footballers’ responses to the crisis and the agreements publicly made at – for example – several Bundesliga clubs.
In any case, it is hard to tell where the balance of power lies. Arsenal do not want to risk alienating certain players to the extent that contract negotiations, which already look more challenging than ever, are compromised further.
Plenty of time had been spent trying to persuade Pierre-Emerick Aubameyang to entertain the possibility of an extended stay before the Covid-19 shutdown, while the club already knew they might not have it all their own way in securing Bukayo Saka – one of the Premier League season’s revelations – with Europe’s giants paying attention.
This is no time for relations to sour and, while fists are hardly flying, a long-running saga regarding pay cuts would risk leaving Arsenal even more vulnerable.
For now the handsomely paid Aubameyang and Saka, who is a year from the end of his first professional deal, operate in contrasting financial stratospheres. Whether cuts or deferrals are settled on it is hard to see how any squad with such a broad pay scale can reach a one-size-fits-all agreement and a slow burn of individual negotiations looks distinctly possible.
First of all, though, an amicable way out of the deadlock is required if Arsenal’s prospects are not to look even more blurred.
(The Guardian)