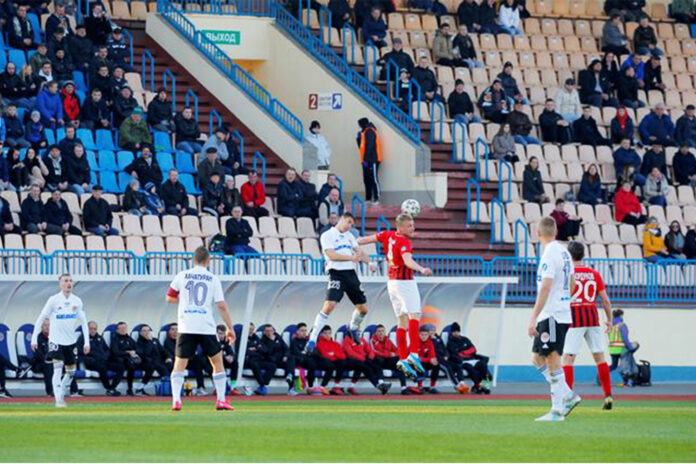 The start of the new women’s soccer season in Belarus has been delayed by fears that players have been exposed to the new coronavirus, but the men’s league shows no sign of stopping.
The women’s league was due to start its 2020 season on Thursday, but the Belarus soccer federation said Wednesday it is now “suspended until further notice.”
The federation added that “several” players had contact with “possible carriers” of the coronavirus.
Belarus is the only country in Europe still playing professional men’s soccer games with spectators in the stands. Belarusian President Alexander Lukashenko has opposed strict lockdown measures and even played in an ice hockey game in front of spectators last month.
“There is no basis to close down the championship,” Sports and Tourism Minister Sergei Kovalchuk said of the men’s league in an interview broadcast Wednesday by the state Belarus 5 TV channel. He was speaking before the announcement that the women’s league was suspended.
Attendance for men’s league games in Belarus has plummeted in recent weeks as many fans chose to stay away. Fan boycotts have been organized at the majority of the 16 top-tier clubs.
“Nowadays, the number of fans has shrunk by more than 70 percent,” Kovalchuk said. “No one is forcing anyone to go to the stadium. You can go, or not go.”
The Belarusian league has attracted fans from other countries in lockdown and signed new foreign TV deals with broadcasters keen to show live sports.
Belarus has recorded 3,728 cases of the new coronavirus as of Wednesday, with 36 deaths.
(Fox Sport)