Even though the regulation of the state of emergency (SoE) stated that using face mask is mandatory at public areas to prevent the outbreak of COVID 19, the law is not properly applied at the current situation.
Police also warn abusing the laws has a punishment up to death.
According to Capital’s observation in different corner of Addis Ababa the use of face mask is rare especially in crowded places.
The trend, at major busy areas like Merkato and public bus transportation areas, continued as usual, even though the state of emergency enforce the use of any kind of mouth and nose coverage at public places.
The regulation of SoE article 4 sub article 6 indicated that using masks or face coverage at banks, market places, public transport and terminals, shops, drug stores, public service areas and other mass gathering areas is a mandatory. The same article sub article 7 clearly states that the mask can be any type including homemade or any kind of scarves.
Commander Fasika Fanta, Public Relation head of Addis Ababa Police Commission, said that the city Police Commission observed the use of face mask is rare. “We evaluated the situation of applying the SoE on covering the face is not being properly followed and we will work on correcting it immediately,” he told Capital. 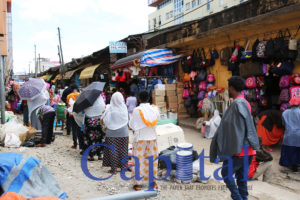 He said that to narrow the gap the Addis Ababa Police Commission in collaboration with Federal Police and representatives of Ministry of Peace is taking strict measures as of Wednesday April 15.
“Due to the holiday season in the past few days the security has been highly focusing on religious areas to make sure that the public did not gather at churches,” he said. “Thursday prayer and Good Friday we have focused on church areas at the same time alerting the public at big market areas and insisted the public to use face mask besides keeping the social distance.”
“We also evaluated the situation at Merkato and Janmeda and we decided that it should be corrected regarding using face masks,” Fasika added.
Jeylan Abdi, Public Relation Head at Federal Police Commission, said that the public is not using the mask as per the expectation, but the public is cooperating and listening the orders of the federal police members who are in duty.
“So far we understand that the public does not internalized the situation and we also get information that there are members of the community that never have heard about the measures that they have to take to keep themselves safe from the virus,” he said.
“We have got such kind of less informed community members that does not have access for media such as those who are engaged on the daily laborer work at the highly congested market place at Merkato,” Jeylan told Capital.
To expand the awareness and address those who are far from media the Federal Police will start sharing information on megaphone in those mass public gathering areas, according to Jeylan.
“Mainly we are focusing on alerting the public to keep their social distance and if it is difficult we advise them to cover their faces,” he said.
Jeylan said that the regular criminal code like article 514 gives a right for attorney general to sue those that disregard the law to punish them from simple imprisonment to death penalty.
He said that “a simple example is that an individual that transported dwellers against the regulation of the SoE was punished 1,500 birr on Thursday.”
“Others that might consider to go against the law of the country and the SoE will face serious punishment according to the country’s laws,” he added.
He advised the public to keep its health by properly applying the recommendations and orders from the policy force.
“The SoE is issued to keep the health of the society itself due to that we have to respect and apply or else face the consequences,” Fasika advised. He recommended the public to act like security force to keep the general public’s health.
Several countries ordered their citizens to wear face masks in public area to cut the transmission of the coronavirus.
Scientists are also advising that the face mask whether it is professional or not will significantly reduce the transmission of the virus.
Currently most of the textile industries are shifting to the production of face masks and several homemade masks are also available in the market.
The government has also recommended the public shall use any fabrics to cover the mouth and nose areas.