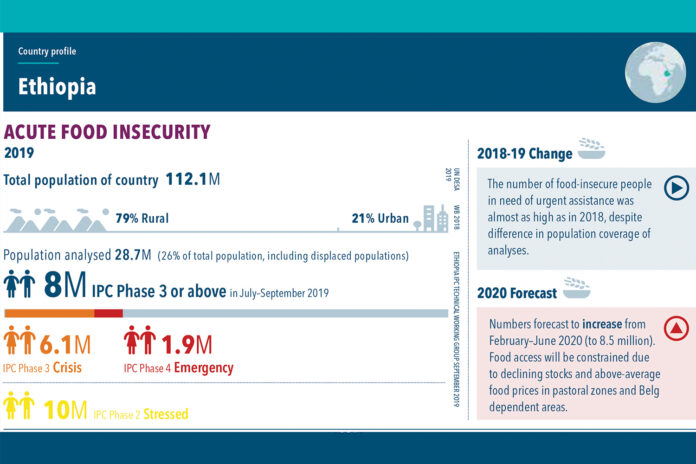 A Global Report on Food Crises released by United Nations has stated that more people face acute food insecurity and malnutrition in the wake of the COVID-19.
The report indicated that at the close of 2019, 135 million people across 55 countries and territories experienced acute food insecurity, noting that additionally, in the 55 food-crisis countries, 75 million children were stunted.
This, according to the report was the highest level of acute food insecurity and malnutrition documented by the network since the first edition of the report in 2017.
The report by the Global Network Against Food Crises, an international alliance of United Nation, governmental, and non-governmental agencies working to address the root causes of extreme hunger.
The 2020 annual Global Report on Food Crises, showed also that in 2019, 183 million people were classified to be in stressed condition – at the cusp of acute hunger and at risk of slipping into crisis or worse if faced with a shock or stressor, such as the COVID-19 pandemic.
It added also that about 73 million of the 135 million people covered by the report live in Africa; 43 million live in the Middle East and Asia; 18.5 million live in Latin America and the Caribbean.
The key drivers behind the trends analysed were: conflict – the key factor that pushed 77 million people into acute food insecurity; weather extreme – affecting 34 million people; and economic turbulence which accounted for 24 million.
Ethiopia
For Ethiopia the report states that while Ethiopia has made development gains over the last two decades, 27 percent of the population, or 30.2 million people, were still living below the poverty line (USD 1.90 a day).
The report also states that over 70 percent of rural Ethiopians are severely poor according to the Multidimensional Poverty Index. “Frequent and severe droughts have eroded resilience for rural households that have lost productive assets and have had little time for recovery between drought events,” reads the report.
The report also states that about 8 million people were in Crisis or worse across Afar, Amhara, Oromiya, Southern Nations, Nationalities and Peoples’ region (SNNPR), Somali and Tigray regions from July–September 2019, despite receiving humanitarian food assistance. This includes about 1.9 million in Emergency of whom over 1 million were in Oromiya. Around a third of the population in Somali and Oromiya faced Crisis or worse. An additional 10 million people were classified in Stressed level. 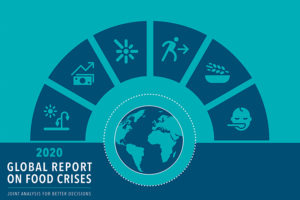 The population in Crisis or worse was similar to that of 2018, when estimated that 8.1 million people were food insecure and in need of assistance. At the start of Meher harvests in October 2019, food security improved, but about 6.7 million people remained in Crisis or worse.
Ethiopia is also the second largest host of refugees in Africa. The result of the annual report indicated that monthly food assistance for refugees lasted from 14–25 days, creating food gaps for up to 17 days a month.
Stating the factors driving acute food insecurity the report pointed out that extreme weather and crop pests contributed to the low yield.
The February-May Belg rainy season was characterized by late onset, erratic distribution and below-average rains. A below-average secondary Belg season harvest in eastern Amhara, eastern Oromiya and north-eastern SNNP regions was expected. In East and West Harerghe zones, where no significant rains were received until April and seasonal cumulative precipitations were up to 60 percent below average, the cereal output was very poor, with crop failures reported in some areas. In western key-producing areas, the June–September Kiremt rains were up to 30 percent above average and aggregate cereal production is estimated at above-average levels. However, unseasonal heavy rains during the October/November harvest resulted in localized crop production shortfalls. Crops were attacked by desert locusts at the end of the year in northern and south-eastern Tigray, north-eastern Amhara and Eastern Oromiya regions. While coordinated control measures implemented by farmers, local communities and the Government have contained crop losses, substantial localized losses were reported in parts of Oromiya zone.