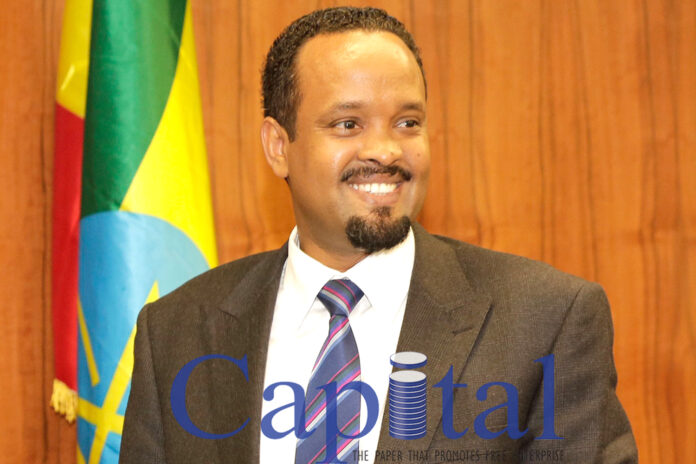 International financial institutions are eager to support Africa’s biggest airline, Ethiopian Airlines from the crises of the pandemic covid 19.
“Ethiopian airlines is a flag ship not only for Ethiopia but also for Africa considering this international financial bodies are becoming interested to support the airline” said Ahmed Shide, Minister of Finance in a press response for the question collected from media houses and journalists to the committee to tackle the coronavirus.
According to Ahmed, the World Bank, International Financial Corporation /IFC/ and African Development Bank are talking with the government to support the airline, “additional to the support of the financial institutions, the government will also give support based on the economic response plan to help the airline through this difficult times.”
Ethiopian Airlines has reported that it loses 550 million dollar in revenue from January up to April after the corona virus pandemic brought passenger traffic to a near-complete halt.
Despite the financial loss, the company’s CEO remains confident that the airline can keep flying, in part by increasing its cargo business.
Last week in a press briefing Tewolde G. mariam CEO of the airline acknowledged that the airline is in a serious financial crisis, but, Tweolde expressed his belief that Ethiopian Airlines will ride out of the current storm. He said that the company was cushioning the financial blow by finding new streams of income.
“We are now focusing on cargo. The cargo business is relatively doing well because urgently required medical supplies are needed all over the world from east to west, west to east, north, south and so on. We are also trying to convert some of our passenger aircraft to cargo,” said Tweolde.
“Cargo business and MRO are becoming the main business of the airline,” said Tewolde adding “even if the airline is losing in revenue, we do not expect any governmental support; the airline came up with a new strategy in response to the business slowdown.”
He also said the company has saved money by cutting back deeply on daily flights and suspending talks with Boeing and Airbus to replace older aircraft in its fleet.
However according to Ahmed, if the situation continues the airline will no longer sustain itself more than three months and other sectors depend on the airline will face economic difficulties, the government need to support the airline as a contributor to the overall economy.
According to Tewolde, the airlines has been in talks to defer lease payment on aircraft and it may seek deferrals on some payments of 2 billion dollar in debt.
“In relation with restrictions of international movements and trades several economic sectors of the country has been highly dented, including the tourism, hotel and tour operations” said Ahmed.
The airline has more than 16,ooo employees and according to the International Air Transport Association currently 1.1 million employees are supported by air transport and tourists arriving by air.
The supply chain is estimated to support 1.5 billion dollar of the GDP and spending by foreign tourists supports a further 2.61 billion dollar to the GDP totaling the sector contribute 4.1 billion dollars to the economy.
“Not only in Africa we are also serving the world, which we are operating in major trade lanes between Africa and Europe, Middle-east and Asia providing a convenient and reliable cargo service,” said the CEO. “We have recalibrated our cargo operations and networks in light of the current demand in air cargo business.”
The airline is expecting to be involved in a critical capacity in Africa’s pandemic response. On Monday it finished distributing the second batch of masks, testing kits, ventilators, and other supplies donated to African countries by Jack Ma Foundation. And last week the United Nations opened an aid transport hub in Addis Ababa that will rely on Ethiopian cargo jets to move supplies and aid workers across the continent.