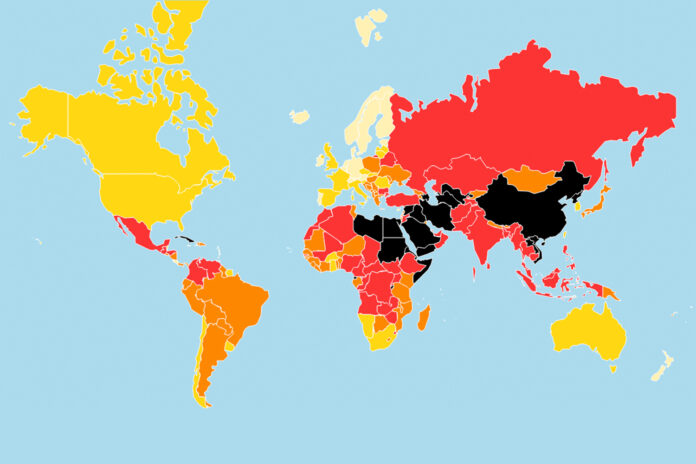 The 2020 World Press Freedom Index, compiled by Reporters Without Borders (RSF), shows that the coming decade will be decisive for the future of journalism, with the Covid-19 pandemic highlighting and amplifying the many crises that threaten the right to freely reported, independent, diverse and reliable information.

Ethiopia has risen 11 places up on the 2020 World Press Freedom Index, and now ranks 99th among 180 countries that most respect freedom of information.
Published annually by Reporters Without Borders (RSF), a non-governmental organisation based in Paris, the index evaluates the level of freedom available to the media throughout the world.
Ethiopia was 110 in 2019 world press freedom ranking. This year, the country achieved a score of 32.82, which was 35.11 in 2019.
Norway has topped the annual press freedom index for the fourth consecutive year scoring 7.84.
Finland retained its second place, while Denmark moved up two places to round out the top three at the expense of Sweden and the Netherlands, which both dropped a place to fourth and fifth respectively because of an “increase in cyber-harassment.”
Published every year for almost two decades, the ranking rates 180 countries and territories based on “the level of pluralism, media independence, self-censorship, legal framework, and transparency,” according to RSF.
The results are “calculated from responses to a questionnaire that is completed by experts throughout the world, supported by a qualitative analysis.”
North Korea dropped to last place in the table, usurping Turkmenistan, while Eritrea, which lies in 178th, is still the county with the least press freedom in Africa.
Malaysia, in 101st position, up 22, and the Maldives, in 79th place, up 19, had the biggest rises in comparison with last year’s Index. RSF cited “beneficial effects of changes of government” in the respective nations.
The report further states that there is a “clear correlation between suppression of media freedom in response to the coronavirus pandemic and a country’s ranking.”
Both China, 177th, and Iran, down three to 173rd, censored their COVID-19 outbreaks “extensively.” In Iraq, down six spots to come in at 162 in the press freedom index, the authorities recently stripped news agency Reuters of its licence for three months after it published an article questioning official COVID-19 numbers in the Middle Eastern country.
The 2020 edition of the Index, which evaluates the situation for journalists each year, suggests that the next ten years will be pivotal for press freedom because of converging crises affecting the future of journalism: a geopolitical crisis (due to the aggressiveness of authoritarian regimes); a technological crisis (due to a lack of democratic guarantees); a democratic crisis (due to polarisation and repressive policies); a crisis of trust (due to suspicion and even hatred of the media); and an economic crisis (impoverishing quality journalism).
These five areas of crisis – the effects of which the Index’s methodology allows us to evaluate – are now compounded by a global public health crisis.
“We are entering a decisive decade for journalism linked to crises that affect its future,” RSF secretary-general Christophe Deloire said. “The coronavirus pandemic illustrates the negative factors threatening the right to reliable information, and is itself an exacerbating factor. What will freedom of information, pluralism and reliability look like in 2030? The answer to that question is being determined today.”