The National Election Board of Ethiopia (NEBE) announced that the risk of ending COVID 19 pandemic should be disclosed by the relevant public health entity.
Birtukan Midekssa, Chair of NEBE, told the parliament that the board will only state that the risk has ended if the relevant government body announced that the spreading of the virus calmed down.
At the parliament regular session held on April 30 at the hall in the compound of the Office of the Prime Minister, one of the parliament members representing the Tigray People’s Liberation Front (TPLF) asked the board when the pandemic risk will be ended.
The board chair said that it will be disclosed by the relevant public health institution than the election board.

The same parliament member also argued that the virus is not at the stage that can be said an outbreak in Ethiopia and argued that the election should be conducted in the timeframe scheduled before.
Initially election board targeted to undertake the national election on August 29, while it has recently announced that it could not keep the timeframe because of the coronaviurs outbreak.
It claimed that the virus has significantly affected the board activity and preparation to conduct the election.
The TPLF member argued that it is difficult to state the virus is at an outbreak stage in the country, “the meaning of outbreak is different at this condition,” he said.
Other members who gave their opinion at the session strongly criticize the idea that come from the TPLF member.
“We should not see high deaths like Europe and America to call it pandemic or outbreak,” one of the parliament members criticized the claim raised by the TPLF member. “We have to keep our society responsibly than looking for political gain and power,” she ridiculed the idea to conduct the election as per the schedule.
The parliament will conclude its term at the fourth week of September 2020 due to that the election should be conducted before that, according to the constitution. However because of COVID 19 outbreak NEBE claimed that it will not conduct the election on time. 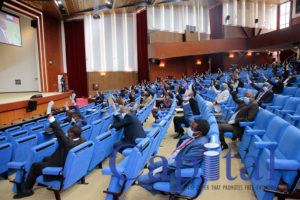 Birtukan told the parliament that the board conducted a study to evaluate the situation that concludes the election cannot be undertaken at the time. The board’s evaluation is approved by the parliament and assigned the law, Justice and democracy standing committee to come up with possible way-out based on the constitution.
A day before the parliament leaders of political parties discussed the possible scenarios to conduct the election in the future.
The possible scenarios conducted by separate group of professionals and presented by Gedion Timothewos, Deputy Attorney General at the Federal Attorney General is tabled and discussed by political opponents.
Gedion stated four thematic alternatives tabled by the groups. The four legal alternatives raised in the present scenario were: dissolving the House of People’s Representatives (parliament), declaring state of emergency, making constitutional amendment, or requesting constitutional interpretation.
The standing committee may come up with similar alternatives, while experts claimed that consensus between the parties might be solution for the election challenge that the country faces because of the virus. 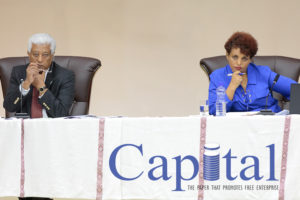 One of the political elites who participated at the political party leaders’ discussion on Wednesday April 29 mentioned the experience of Chile, which postpones the election that was supposed to be held this month.
He said that political parties should have consensus than any legal way out to bypass the current challenge and conduct the election in the near future.