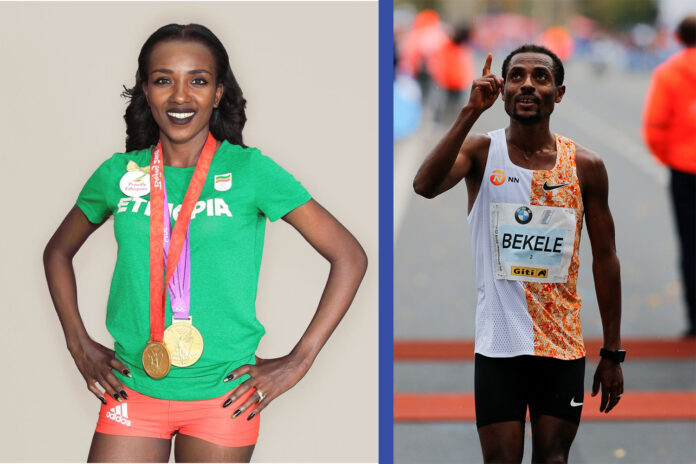 Tirunesh Dibaba ran in an empty stadium and Kenenisa Bekele inside his own home as the former Olympic champions raised funds Saturday for Ethiopia’s fight against the coronavirus outbreak.
The Ethiopian athletes were joined by amateur runners from across the world. Participants ran on treadmills or on the spot inside their homes, or around their gardens.
The event was streamed live online and runners connected on Zoom, Facebook Live and YouTube in a virtual fundraiser.
Tirunesh, who won three gold medals in the 5,000 and 10,000 meters, ran at an empty National Stadium in Addis Ababa with sisters Genzebe and Ejegayehu, also top athletes. Kenenisa, also a three-time Olympic champion, ran inside his home with members of his family seen in the background on his video stream.
Organizers said money raised will be donated to two Ethiopia-based non-profit organizations that are helping the country’s efforts against the virus.
Grand African Run, an annual fun run usually held in the United States, and the Ethiopian Athletics Federation combined to organize the event. It attracted runners from across the globe, mostly Ethiopians. There was no specified distance or duration for the participants to run.