Over 113 bln birr outside the banking system

The Ethiopian Bankers Association (EBA) announced that it demands more strong measures to improve the liquidity flow in commercial banks.
The association that appreciated the current National Bank of Ethiopia (NBE) decision, which it issued a directive to limit the cash withdrawal, said that it would demand more measures from the government.
In the press conference held on Wednesday May 20 members of the board of directors of EBA said that the central bank should impose maximum amount a person can have in his home or safe besides the latest cash withdrawal limit from banks.
The association also conducted a study and tabled its proposal for the governing body in June last year. The study indicated that the government should impose limitation on cash withdrawal from banks, limit maximum cash amount found on hand and changing the feature of the birr. 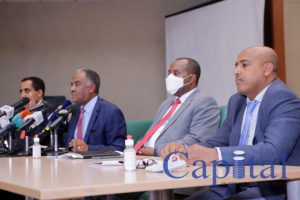 “Based on the data of April 2020, 113 billion birr is out of the banking system and that should be returned back and serve the economy,” Abe Sano, Chair of EBA, said.
“We have also asked the government to implement more measures to return the money that is currently out of the banking system,” he added.
He stated that the association requested the central bank to enforce these measures.
Experts in the industry said that imposing range on maximum cash on hand may take time.
Yinager Dessie, Governor of NBE, told media on Tuesday that the government imposed the cash withdrawal limit so far and other measures will be implemented in the future.
The NBE’s cash withdrawal limit directive states that the withdrawal amount for individuals is 200,000 birr per day and one million per month. The amount for companies is 300,000 birr per day and 2.5 million birr per month.
Financial institutions that violets the directive will be fined 25 percent of the cash withdrawal value exceeding the limit.
According to the association it asked the government to implement the measure about five years ago and in different occasions in the past.
Members of the association said that the banks have automated their system that shall accommodate the cashless transaction and the new directive will also help them to focus on their technology development than engage on expanding branches, which is unnecessary cost.
They said that may be about 5 percent of the society withdraw 200,000 birr per month, while most of the society is not included in this range.
Abe said that banks shall reduce their investment on expanding branches and focus on technology advancement.