The National Bank of Ethiopia (NBE) that targeted to introduce the secondary market this month has stated that it is working to table the issue for cabinet by next month.
Late last year Yinager Dessie, Governor of NBE, stated that the central bank is preparing the document to table it to the Council of Ministers for approval.
Now he said that the document and relevant preparation works are not yet finalized so far. “The work is not easy and it forced us to delay the launching of the capital market,” he said.
“We are trying our best to finalize the preparation work,” he said at a press conference held on Tuesday May 19 at his office.
“The work is very bulky and we are working to table for the cabinet by June,” Yinager told Capital.
In December last year the Governor told Capital that the secondary market will be finalized in this month.
“We would push the commencement period because the preparation in not finalized,” he said but did not give a specific time frame when the highly anticipated stock market would be introduced in Ethiopia.
Introducing the new market is one of the reform agendas that are being done under NBE. 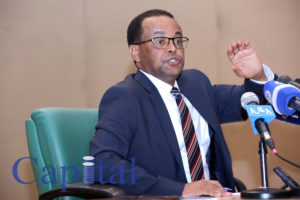 Ethiopia actually had a stock marked before most other African countries, some 60 years ago but when the Derg took over that stopped.
Currently finance is only accessible in a primary market that is directly related with banks for the private and public sector or through treasury bills (T bill) for the government.
In December the central bank restarted the T bill with the aim to attract private banks and other private sector players and to make atransition for the biggest market.
The central bank will deliver the draft document to the council of Ministers and they will decide whether it would be started by regulation or proclamation.
If the council of Ministers approve it as a regulation the starting time will be short, but if the council decides the law should be ratified as a proclamation it would be sent to the parliament.
In the last two years NBE introduced several new schemes in the financial industry that includes allowing the diaspora to enter in the banking and insurance business.
It also enacted a bill to access finance on movable assets, improve agent banking directive and interest free banking are the new entrants under the NBE reform.
Improving the credit information database of individuals or companies is also improved.
Part of the reform cash withdrawal limit, which will tackle illegal acts and frauds, is also introduced this week. The National Bank of Ethiopia stated that companies can only withdraw a maximum of 300,000 birr per day and/or 2.5 million birr per month. Individuals can withdraw a maximum of 200,000 birr and/or 1 million birr per month.