The Embassy of the Republic of Korea in Ethiopia delivered masks to the Ethio-Korean War Veteran Association on May 19, in an effort to prevent the spread of COVID-19 amongst the Ethio-Korean War Veterans.
“These masks were provided by the 70th years Anniversary of the Korean War Commemoration Committee of the government of the Republic of Korea in return for the contribution and sacrifice made by the Ethiopian war veterans during the Korean War,” said ambassador Hoon-min Lim Korean Ambassador to Ethiopia. 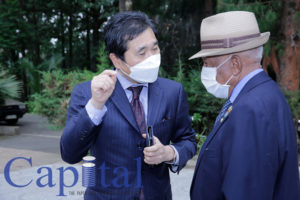 The Embassy announced that a total of 40,000 masks will be delivered to 911 people including war veterans and their family members. The Embassy will visit each household of the war veterans and their family members in Addis Ababa and the surrounding localities, recognizing the urgent need for masks by the elderly war veterans with an average age of 90, who are highly vulnerable to the risks of COVID-19.
“Korea will not forget the significant contribution and the noble sacrifice of the Ethiopian war veterans to protect peace and freedom of the ROK during the Korean war,” said Hoon-min Lim, in the handing over ceremony.
“The ROK has been making an effort to promote the health and welfare of the veterans, and today’s donation is part of the effort to demonstrate the willingness of the ROK government,” the ambassador further said.
Melese Tessema, Head of the Korean War Veterans Association, announced that, the war veterans are grateful for the diverse forms of assistance provided by the Korean counterpart, including medical support and scholarship programs for the descendants of war veterans. “This donation of masks is another chance to reaffirm the warm support from the ROK government and the Korean people towards war veterans.”
“We are delighted to witness the continued development of bilateral relations between Ethiopia and Korea, and we would like to request for sustained support for the war veterans, their family members, and their descendants,” said Melese.
On May 12, 2020 the republic of Korea government has provide supply of 25,000 portions of the Korean diagnostic test kits to the Ministry of Health and the Ethiopian Public Health Institute (EPHI). 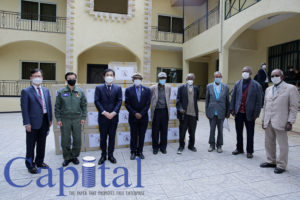 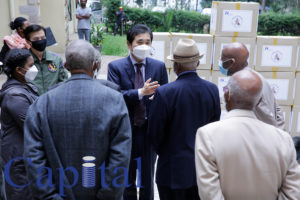