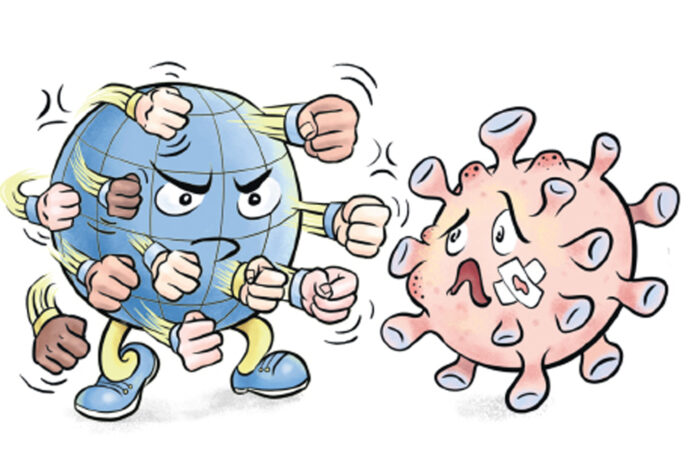 One of the very few good things about the COVID 19 pandemic is when it happened. Just imagine it had it struck two decades ago, when the Internet was still at an early stage. Staying at home would have felt a lot lonelier. People are relying on the Internet to help them cope with the pandemic, but of course it is only part of the story. Shifts in work patterns, convenience factors, traffic and congestion management as well as future episodes of enforced confinement will further accelerate the existing trend toward cyberspace.
Almost everyone in America and Europe are now shops online, banks by using banking apps and pays bills electronically. Even those of us who resisted the Internet before have succumbed to it during the pandemic. Currently, Ethiopia also reportedly technologically well equipped to launch electronic transaction. This was indicated on 6 May 2020 when the Minister of Innovation and Technology, Dr. Abraham Belaya discussed the electronic transaction draft bill with human resource and technology standing committee of the House of Peoples Representatives (HPR).
With the same token, distance learning has finally taken hold. Distance learning has also become a necessity for many millions of school kids and college students around the world. Now that its potential is more obvious, it will be more accepted in the future. Here again, several schools are struggling to get their pupil engaged electronically. Alexei Bayer, a Senior Economist based in New York stressed that demand-side pressure will inevitably lead to significant supply-side improvements. No change is behaviorally more significant than teachers now thinking in a dual mode, about the physical and the digital classrooms.
Alexei Bayer noted that people who only worked at the office before the pandemic are likely to spend at least some time telecommuting after it is over. And the shift to teleconferences will be permanent, largely replacing business travel. Watching movies, theater productions and concert performances from the comfort of one’s own home is definitely on the upswing. The prospect of sitting in a confined, crowded space for a couple of hours suddenly seems so yesterday. This will have implications not just for airlines, but also for hotels, expense account restaurants, concert halls and theaters alike. The real question here is, after COVID 19, will they ever be back?
Ashutosh Sheshabalaya, CEO of SolvX, a global security services and research firm stated that all of which leads us to a new source of significant worry: Computers are also very susceptible to infections by viruses. That computer viruses infect computers and can spread around the Internet has long been known. The potential for mischief, or just mishaps, is increasing significantly in the age of the coronavirus.
According to Ashutosh Sheshabalaya, the parallels are astonishing. Like the novel virus SARS-COV-2, which invades living cells forcing them to produce copies of the virus, malignant computer programs force infected computers to do their bidding. And while we may have found protection against “old” computer viruses, the race for new, even more destructive computer viruses is always on. There have been several viruses attacking computers around the world that have been quite scary. So far, cyber security firms, which often hire those who used to create viruses themselves, have been able to deal with those viruses fairly successfully.
But viruses are becoming more sophisticated, aided by artificial intelligence and machine learning. There is a clear and always present danger that an equivalent of the current coronavirus will paralyze our computer networks and systems and force us to shelter in smaller networks – or even to leave the Internet entirely. Cybercrime has been rampant. Much of it, whether to steal people’s identity, to empty bank accounts or to lock up systems and demand ransom, operates as a for-profit business.
Holger Schmieding, Chief Economist at Berenberg Bank in London predict that an estimate puts damage from cybercrime at 6 trillion dollar by next year, up a staggering ten times from 600 billion dollar in 2017. No wonder that cybercrime has already been called a pandemic and one of the greatest challenges facing the world. Industrial spying is also a big business. Even though companies try hard to shield themselves from it, effective protection is hard to come by. The human slippage factor is very large.
Governments are trying to combat all those malicious activities but with very limited success, especially since they themselves are likely to engage in hacking, spying and cyber warfare, which involves designing and spreading malware. The United States and Israeli governments have been engaged in sabotaging Iran for years, using all kinds of sophisticated cyber weaponry. According to Holger Schmieding, some of the worst malware was allegedly designed by those countries’ secret services. Worse, national cyber warriors are believed to have deadly weapons at their disposal, ones that can disable the adversary’s power grids or damage nuclear plants. On the other hand, when it comes to identifying cyber criminals, even technologically advanced governments seem impotent, or at least they are losing the war.
To conclude, as with the coronavirus, the more crowded we become on the Internet, and the more interactions with strangers we become party to, the greater the danger of a serious infection. Potentially, this threat rises to the point when doubt could be cast on the very future of the Internet.

Machiavelli and the future of globalization

Fragile Environments and The Private Sector