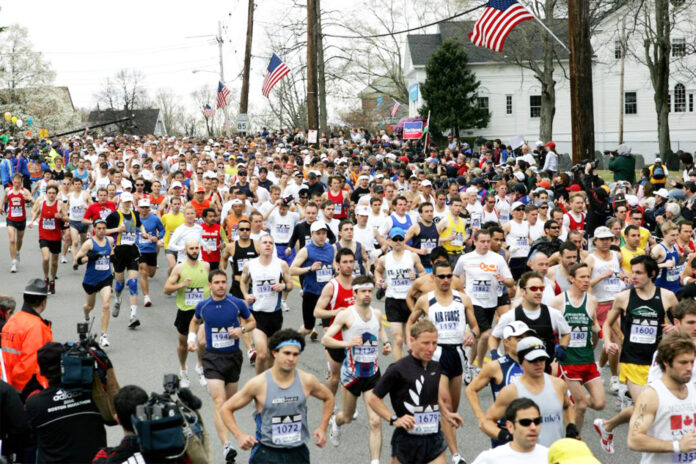 The 124th Boston Marathon has been cancelled as an in-person race and will instead be held as a virtual event in September.
The historic marathon, which traditionally takes place on Patriots’ Day, had previously postponed from April 20 to September 14 due to the coronavirus pandemic. Held annually since 1897, it is the first time the race has ever been cancelled.
“Our top priority continues to be safeguarding the health of the community, as well as our staff, participants, volunteers, spectators, and supporters,” said Boston Athletic Association (B.A.A.) CEO Tom Grilk. “While we cannot bring the world to Boston in September, we plan to bring Boston to the world for an historic 124th Boston Marathon.”
In a statement on Twitter, Boston Mayor Marty Walsh said: “The B.A.A., with our input and support, has determined that the traditional, one-day running of the 124th Boston Marathon is not feasible this year, for public health reasons.
“While our goal and our hope is to make progress in containing the virus and recovering our economy, this kind of event would not be responsible or realistic on September 14 or any time this year.”
All participants originally registered for the April 20 event will be offered a refund of their entry fee and and will be able to use their qualifying time for 2021 Boston Marathon registration. They will also have the opportunity to take part in the virtual alternative, which can be run any time between September 7-14. The B.A.A. 5K scheduled for September 12 has also been cancelled.
The Tokyo Marathon on March 1 did not include the mass race, with only elite action taking place. Around 38,000 participants had been expected to take part.