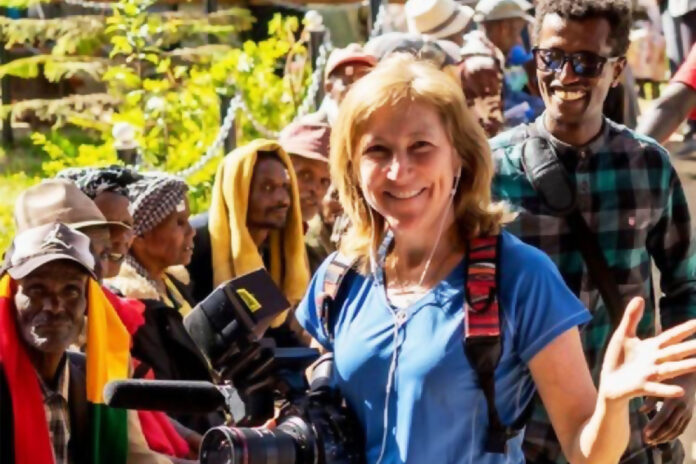 Mary Olive Smith ’88 is glad she isn’t 20 years old today, when everyone is expected to have an Instagram brand that may or may not reflect reality. Reality is Smith’s bread and butter.
At 53, the seasoned filmmaker remains laser focused on bringing truths about the world into viewers’ living rooms.
As the owner of Flying Pup Productions, Smith aims to create “moving image that moves the world” through the medium of documentary filmmaking.
Now the winner of an Emmy Award for the feature-length documentary A Walk to Beautiful, Smith says the path to her art was both obscured and illuminated by her varied passions.
Smith created her own major at Davidson, combining her love of culture, language, art history and political science. She first considered diplomacy as a career option.
“I was given the advice that sometimes the policy line wouldn’t align with my heart,” Smith says. “I had always been involved with film and music, and I knew that was truly what filled my heart, so I kept following my passions, and everything fell into place. It turned out I had knack for the technical and logistical side of filmmaking—the grind of it all. I was never doing it for the glamour; I love the day to day.”
For the first decade of her career, Smith produced primetime documentaries for PBS, Discovery and National Geographic, among others. Then, while working at Engel Entertainment in New York City, she was approached about the life-changing opportunity to direct A Walk to Beautiful.
The film tells the story of women in Ethiopia devastated by obstetric fistula, a childbirth injury with medical complications that can result in depression, infertility and social isolation. A USAID study documented an estimated 36,000 to 39,000 women in Ethiopia live with obstetric fistula, with more than 3,000 additional new cases occurring each year.
An anonymous funder contributed seed money for the project to shine a spotlight on the under-recognized issue.
Smith directed the documentary, which is available on Netflix in abbreviated form. She says it is both a story of healing and hope.
“By far, it was the best experience of my life,” Smith says. “There’s something about childbirth that is universal—you can go to the most remote part of the world and connect with another mother.”
Form and Content
Smith has since shifted her focus to freelance work, which provides more freedom to choose projects. Much of this work calls for shorter pieces on big topics, ranging from maternal health to infectious diseases—in places across Africa and in Haiti, remote parts of Nepal and Indonesia.
“I’ve always tried to tell the in-depth story no matter how long the end result is,” she says. “The challenge of adapting my storytelling technique into very short pieces was fascinating. I still prefer long form, but I learned you actually can tell a lot in a short time.”
One recent, longer-form project for the acclaimed PBS science series NOVA took Smith to Baltimore. She followed Safe Streets, an organization that’s working to stop violence by using an epidemiological approach. Filming in drug-ridden neighborhoods, she worked alongside a team of former gang members who are now fighting to save their communities.
“Culturally, it was the most difficult thing I’ve ever done,” she says. “I had to gain trust from people who have lived very different lives from my own.”
Looking ahead, Smith, who sings in a country music band and grew up in North Carolina, is interested in covering Appalachia and the poverty and plague of drug addiction in the region. She sees parallels to her work in Baltimore—addiction destroys urban and rural communities alike. She lives in a universally accessible home in Maplewood, NJ, with her husband, a librarian and fellow musician, and their 11-year-old son, who uses a powered wheelchair and enjoys life to the fullest.
“I can’t work for free, but I wish I could,” Smith says. “I feel lucky to get to work on these issues and tell important stories. Whether I’m in Baltimore or Ethiopia, I listen with sincerity to what people have to say. I’m 53 now, and I hope I’ll keep making films for another 30 years. People in my field tend to never quit.”
This piece appears in the Spring/Summer issue of the Davidson Journal magazine.