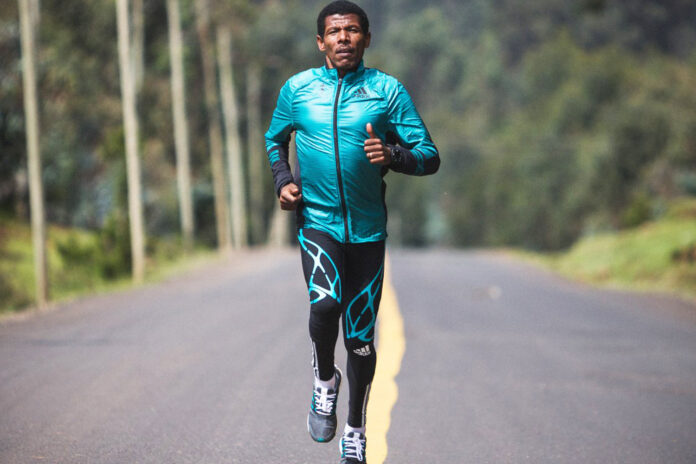 Ethiopia’s running legend Haile Gebrselassie took part in the final day of the virtual 5km run in Addis Ababa over the weekend.
The 47-year-old two-time Olympic 10,000m gold medalist Haile joined two current Ethiopian world champions, Muktar Idris and Netsanet Gudeta, and former world champion Gete Wami in the charity-driven event.
Haile, Muktar, Netsanet, and Gete took part in a “champions’ relay” over 5km to close the event which had opened on June 1, and has raised more than 100,000 Ethiopian birr (2925 US dollars) for Ethiopia’s fight against the novel coronavirus pandemic.
More than 500 participants including runners from around the world took part in the run which was organized by the Great Ethiopian Run.
The champions’ relay took place at the Addis Ababa Stadium and saw Haile teaming up with Gudeta, the 2018 world half marathon champion, against the Muktar and Gete, respectively the 2019 world 5000m champion and 1999 world 10 000m champion.
Haile and Netsanet covered their 5km in 16:57.26 while Muktar and Gete ran 18:56.49. The event was broadcast live in Ethiopia on Fana TV.
Haile said: “This is a difficult time not only for athletes in Ethiopia, but for the whole country. Our hope is that this race will motivate our citizens to stay fit and keep exercising while we fight the disease.”
Haile still trains daily on his treadmill at home. He has been a prominent campaigner on national media during Ethiopia’s fight against the disease. In April he featured in a campaign video to encourage Ethiopians to stay at home and practice physical distancing and spoke again to the public about the importance of measures to prevent the spread of the disease.