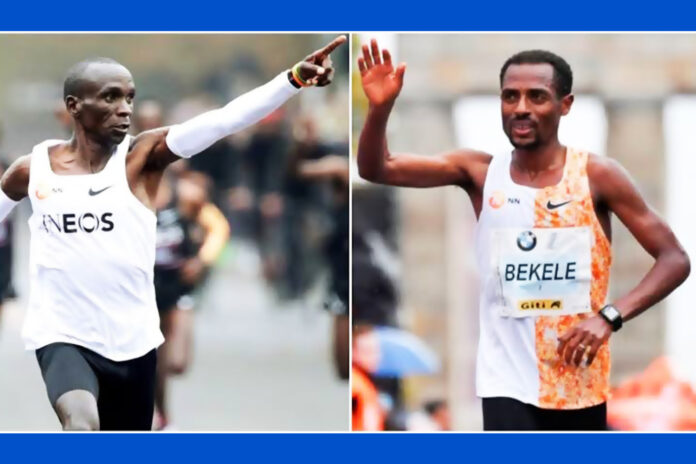 More than 100,000 fun runners from at least 100 countries competed in The MA RA TH ON Worldwide Team Relay races.
A record 106,000 professional and amateur runners competed at The MA RA TH ON Worldwide Team Relay contest spread across the world at the weekend.
The Ethiopian ran his 10.5km in 32:57 on his own track that he built in Sululta, 25 minutes outside the Ethiopian capital Addis Ababa.
The 5,000m and 10,000m World record-holder built a six-lane all-weather track which is home to many athletes training and dreaming of Olympic glory.
They call it Bekele’s ‘field of dreams’. “It was a great pleasure to run my 10.5k as part of the MA RA TH ON challenge on my own track in Sululta,” Bekele posted.
The event was organised by NN Running Team, an international team of elite long-distance runners managed by a company in the Netherlands.
World marathon record holder Eliud Kipchoge topped the billing as 100,000 plus people in 100 plus countries ran 1,000,000 plus kilometres as part of the ‘Run as One’ virtual team marathon.
Kipchoge, Geoffrey Kamworor Ethiopia’s Kenenisa Bekele and Joshua Uganda’s world 10,000m champion Cheptegei – athletes of the NN Running team formation – were among a host of world beating stars that competed.
The athletes combined for a staggering 21 laps around the world combined by recording a total of 842.658 kilometers. Many of them shared their experience proudly on social through #RunAsOne, a hashgtag which was used over 3000 times in the buildup and during the even.
The event also received support from the broader sporting community as Tottenham Hotspur FC cheered on Kipchoge and cheered on their fans on the challenge while ultra-running legend Killian Jornet set out to complete the 10.5km for his part of the challenge.