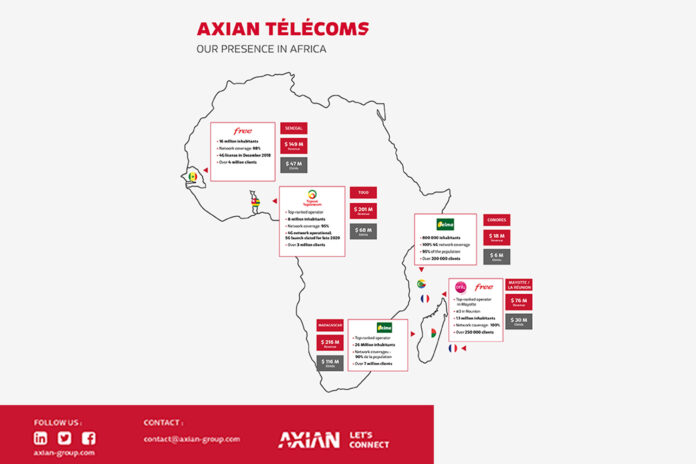 AXIAN Group has become one of the African telecom operators to express interest to invest in Ethiopia.
At the last week of submission of expression of interest (EOI) for telecommunications service licenses that will come to an end tomorrow mid-day a handful companies have filed their EOI.
According to the information Capital obtained, AXIAN, who is stated as the fastest internet provider in the continent, has expressed its interest to be one of the two private telecom operators in Ethiopia.
Two years ago the then ruling collation EPRDF decided to open the telecom sector besides sell a share on the state owned monopoly, Ethio Telecom.
In its statement the company that commence operation 150 years ago from Madagascar and operate in six African countries said that it would like to expand its foot to Ethiopia and execute its best experience on telecom operation in other countries.
“In Ethiopia, the second most populous nation in Africa with more than 105 million population with median average age of 18, AXIAN Telecom will bring economic prosperity to Ethiopians through affordable, seamless, fast and state-of-the-art Tiers 1 telecom services that will allow job creation, nurturing entrepreneurship and supporting Ethiopia’s Digital Transformation Strategy that was just approved by the Council of Ministers on the 15th of June 2020,” the group said in a statement.
Different reports indicate that the telecom operators enabled to boost the internet connectivity of the biggest island in the continent that will create jobs and hard currency earnings.
“By making Madagascar the country with the fastest internet connection in Africa, we have addressed the challenges of economic development, rural isolation and geographic disparity with an ambitious investment policy that involves installing more than 10,000 km of fiber-optic cable and modern mobile technologies, including 4G, 4G + and soon 5G,” in its statement the company says, “Madagascar has become the global centre of BPO, resulting in significant employment gains as well as bringing revenue from abroad into the country´s economy.”
“We see similar traits of our operation in Madagascar existing in Ethiopia, that a large tech-savvy young graduates look for employment and strong connectivity being a game changer for both forex revenue generation and job creation by making Ethiopia preferred destination for international outsourcing & BPO center through fast connectivity,” the company said.
The information Capital obtained indicated that AXIAN Group recorded USD 1.1 billion in global turnover in 2019, with USD 1 billion investment in its operations.
AXIAN also operates the largest network of petrol stations and distribution network of petroleum products in Madagascar, as well as several telecommunications and mobile-money operators across the Indian Ocean and Africa.
By developing and investing in new infrastructure on an international scale, AXIAN advances financial inclusion in the countries where it operates.
The company also claimed that these investments materialize by delivering the fastest internet in Africa (and even faster than few European countries) have made us the number-one telecommunications operator. AXIAN Telecom also possess around 3,300 telecommunications towers on the African continent that support its telecom operations and cutting-edge mobile networks in Madagascar, Reunion Island, Mayotte, Comoros, Senegal and Togo.
In all the countries where it operates and AXIAN Telecom now boast having deployed more than 13,600 km of terrestrial fiber optical backbones and invested in 13 international submarine cables.
The Group is also a partner of the upcoming 2Africa submarine cable project, which will shore up connectivity throughout the continent while creating better connections between Africa, the Middle East and Europe.
According to the Ethiopia Communications Authority EOI invitation document issued on May 21, the initial license term that will be given to an operator will be 15 or more years with the possibility of renewal.