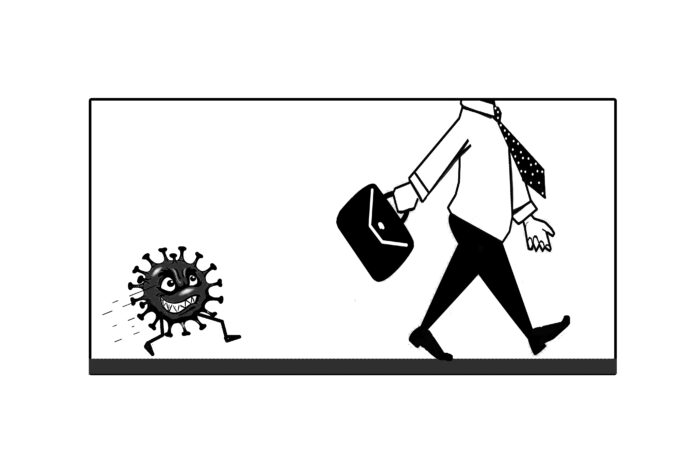 Modern society, as many previous societies were, is a comprehensive social compact between rulers and the ruled. The rulers are those who decide on behalf of everybody. The ruled are those who are always at the receiving end. Traditionally, the ruled prefer to defer to those in positions of power, at least in those past eras when power was also responsibility and not only plunder. In earlier phases of the existing world order, even when there were plenty of bad apples in the community of the rulers, the ruled, by and large, assumed (at times to their dismay) the collective ruling leadership can be somewhat trusted, at least when it comes to critical matters concerning the larger society. This was and still is the crux of the social compact that holds, albeit tenuously, modern societies together!
In late modernity, this long established compact or trust (that withstood the polarization of old) between the ruling classes and the sheeple (human mass) seems to have been irreversibly fissured if not altogether broken. The modern rulers of the global system seem to be out of sync with the needs and aspirations of the masses. The modern rulers’ obsession is about themselves and nothing more. The ridiculous level of polarization, both within and between countries, is one obvious reality that illustrates the bad governance at play. In order to fulfill their objectives, the reigning elites use all kinds of weapons to render the sheeple (human mass) docile. Lies remain the main tools of this dangerously destabilizing endeavor. There is literally no area of governance where lies are not effectively employed today. Lies permeate every nook and cranny: from lies regarding economic data to Covid-19, from terrorism to color revolution, etc., etc.! Ultimately, the highly centralized machine that continuously spews out lies after lies (all across the globe) will face the music! For a start and unlike before, the prevailing deceitful ways can easily be exposed, even if these truths are not allowed to circulate freely! The lost legitimacy of the status quo, on many fronts, is another indicator of situations getting progressively worse. The world system, most likely, has now entered its twilight zone!
Almost all global institutions have now lost their credibility, as a result of this extreme divergence of interests between the ruled and the rulers. For instance, the whole global educational infrastructure, for the most part, is now used not to enlighten but to indoctrinate and brainwash; to make sure the populous remains zombified. As science became ‘big’, it also succumbed to the cheap political manipulation of the parasitic elites of the status quo. Even in the general field of the sciences, it seems the only genuine intellectual sanctuary left for the deeply reflective is in the realms of pure mathematics. No wonder the Russian mathematician Grigori Perelman, working from his mother’s rural home, emphatically refused the establishment’s prestigious awards. He declined the Millennium Awards (a million US dollars), the Fields Medal (mathematics’ equivalent of the Nobel Prize), European Mathematical Societies’ prize and many others, that were extended to him on the account of his seminal proof of Poincare’s conjecture. Grigori even threatened to stop doing math if establishment cretins (media, politicos, etc.,) don’t stop bothering him. In his own words; ‘I’m not interested in money or fame; I don’t want to be on display like an animal in a zoo.’ Hallelujah!
Big science is now half-truth (life sciences) and wild speculation (astronomy) because of the management imposed on it by transnational capital and its subservient states. The implication; plenty of venerable sciences and scientist are now part and parcel of the weapons of ‘institutions of lies’ or the Ministry of Truth, to use Orwell’s lingua. WHO’s entanglement with Big Pharma is well known and documented, long before Covid-19 came to the scene. See Al Jazeera’s documentary films on the matter. How this whole project of inculcating the global sheeple with untold lies will end up is anybody’s guess! On our part, we recommend, at least to our critical readers, web sites/documents that are written, supported and managed by independent researchers and not politicians, propagandists or any other malicious promoters of lies! To this end, we suggest the critical articles of Swiss Policy Research (www.swprs.org). See the article next column.
What exasperates the ongoing mistrust between the ruled and the rulers is also the chronic lack of (all rounded) quality leadership. See the ‘Hutch Report’ on page 50. The continuous degradation of leadership has been visible since the Deep State (DS) aggressively took over the critical functions of global governance. Even in the most enlightened societies of the Nordic countries, trust in their institutions has been gradually eroding, thanks to the influence of the Anglo-American nation-states’ worldview, which desires to sustain the parasitic relations between the two protagonists (ruled & rulers). At the center of it all, it is empire’s aspiration, led by the DS, which is the major obstacle to decent coexistence at the global level. It is empire’s sick and wicked ideology that is fostering mistrust all over the planet.
The eerie relevance of the old accomplished manipulators’ teachings to our reality is frightening. ‘It is the absolute right of the state to supervise the formation of public opinion.’ Joseph Goebbels, Nazi propaganda minister. Finally here is the American ‘father of spin.’ “The conscious and intelligent manipulation of the organized habits and opinions of the [public] is an important element in democratic society. Those who manipulate this unseen mechanism of society constitute an invisible government which is the true ruling power of our country.” Edward Bernays. Good Day!