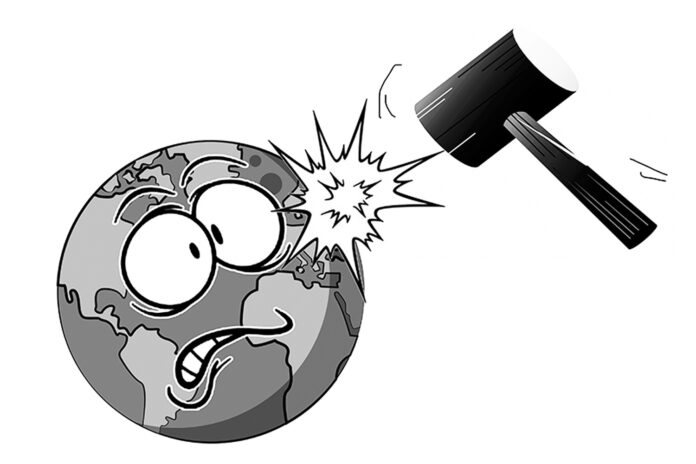 The global order is in visible disarray. Besides the on-going pandemic/plandemic, there is also a structural collapse taking place behind the scene. This collapse permeates all aspects of life: the economy, social, health, culture, etc. According to a number of critics of modern societies, both past and present, complex societies are prone to collapse. The major reasons are obvious to the inquisitive. Complex societies need myriad inputs to function smoothly. These inputs are obtained direct from nature as well as from derived concoctions. For instance; complex societies need cheap energy and there are many things required to have useable energy broadly available to society at large. Amongst which, we can mention engineering knowhow, finance, transport, power lines, pipe lines, etc.!
The above inputs are mostly of material nature. There are also institutional infrastructures that must be in place to have a viable society, let alone a complex one. The amalgam of the material as well as the institutional, comprise the lion share of what is now called the ‘technosphere’ (Dmitry Orlov). The technosphere puts its ever-increasing dynamic demand on complex societies. Not many complex societies are in a position to curtail these demands. When a problem arises within a complex system, it is usually a compounded (more complex) initiative that is proposed as a cure. To abandon the underlying cause that is creating the problem in the first plac,e has become an unthinkable proposition in late modernity. The natural limit of the planet is already breached, thanks to the shortsightedness of the walking ape (humans)! Nonetheless, these various limits, natural or otherwise, are not to be considered, particularly if the demand comes from the technosphere. Unthinking minions with their infantile logic (infinite growth on a finite entity/planet) are exasperating the already grave situation. It seems the logic of our global ruling elites mimics that of the folkloric donkey. ‘Once I am gone, I don’t care if the grass grows’ (Amharic proverb)!
Once again, almost all critical thinkers, largely basing their analysis on the second law of thermodynamics, which stipulates that the state of disorder always increases with time. Or put another way; order, whatever kind (physical or institutional) requires continuous energy inputs to maintain it, i.e., to preserve the status quo). When this law is applied to complex human societies, the prediction is obvious; all complex societies will ultimately collapse (Ilya Prigogine, et al.)! Taking his cue from the collapse of the USSR, Dmitry Orlov, a Russian born US engineer, has enumerated five critical stages of societal collapse. Orlov has argued the US/Empire has entered the accelerating phase of collapse. The first stage of collapse is financial collapse, to be followed by commercial collapse. The third is political collapse and then comes social collapse. It is what he calls cultural collapse that is the closure of the collapsing processes. Given this line of analysis: are we witnessing financial collapse in the US/Empire? Well, when the US Treasury bonds, the most liquid in the world, have difficulties garnering real demand from buyers, one cannot help but ask; is this it? We do not include the central banks as bona fide buyers of government bonds (FED/EU/BOJ/BOE. etc.,), since they constitute aspects of governments’ monetary operations.
Is commercial collapse on the horizon? Does the ongoing US-Chinese trade altercation count as one more precursor of thing to come? Is the current obsession with identity politics, Political Correctness (PC) or the Woke culture, along with the vicious maneuvering of electoral politics by the Deep State (with attendant consequences) indicate a coming political and social collapse?
Cultural collapse is something that has been holding the human collective together since time immemorial. This is the primordial level of existence where mutual benefits based on relatively peaceful coexistence, was paramount. It was mostly based on familial affiliation and tribal affinity. When this is lost, everything that is ‘human’ is lost. It seems the above five stages of collapse should not necessarily be chronological. They can happen concurrently, or might even occur out of step. Moreover, collapse doesn’t need to be catastrophic, it can take place gradually. For example, it took centuries before the Roman Empire completely disintegrated. The first stage was the breakup or the bifurcation (Immanuel Wallerstein) into the Western and Eastern Roman
Empire. The former collapsed in 456 AD, while the Eastern Roman Empire, basing itself in Constantinople/Byzantine, modern day Istanbul, kept on going for another millennium. It finally fell under the Ottoman Empire in 1453 AD. See the articles next column on pages 30.
Gradual collapse, if it can be orchestrated, might well be better, since it can indicate potential future courses to contemplate about. Here is one way out, as proposed by a 20th century philosopher. “What can oppose the decline of the west is not a resurrected culture, but the utopia that is silently contained in the image of its decline.” Theodor W. Adorno. Good Day!