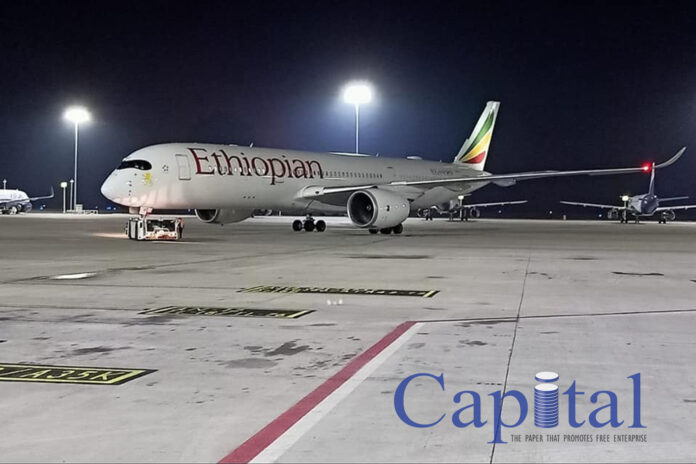 Sources told Capital that the airline is getting ready to start its full passenger flights in August and September.

Last week Ethiopians were one of the 10 countries allowed to enter in the European Union territory as the boarders of EU reopened in July. Besides Ethiopians, Mozambique, Angola, Namibia, Zambia, Rwanda, Uganda, Egypt, Tunisia, Algeria and Morocco are included in the list.

On March 31 Ethiopian airlines announced that it had suspended passenger flights to 80 destinations around the world however because of the surprising spread of the pandemic in the last three months the airline has cut off 90 percent of its international passenger destinations out of its 110 destinations and focus on cargo, maintenance services and charter flights.

The corona virus that originated in Wuhan, China in December has spread to all countries and regions all over the world.

Ethiopian Airlines is already bracing for income loss of half a billion dollars and has axed most of its scheduled passenger flights, but is turning to cargo and charter operations to soften the blow.

In the first three months of the 2020 the airline has announced 550 million dollar in revenue loss although the losses reached one billion dollar in six month starting from January up to June.

Focusing on cargo flights has enabled the airline to recover from the crises after that outbreak of the pandemic.

According to recent reports the Airline has make 120 million dollar revenue in a month from cargo services which enabled the state owned aviation group to cover all its monthly expenses.

Since the air transport is critical to economic and sustainable development in the region recently the air transport association has called on governments in Africa to rapidly implement ICAOs global guideline for resorting air connectivity to ensure the safe and harmonized restart of the aviation in the region.