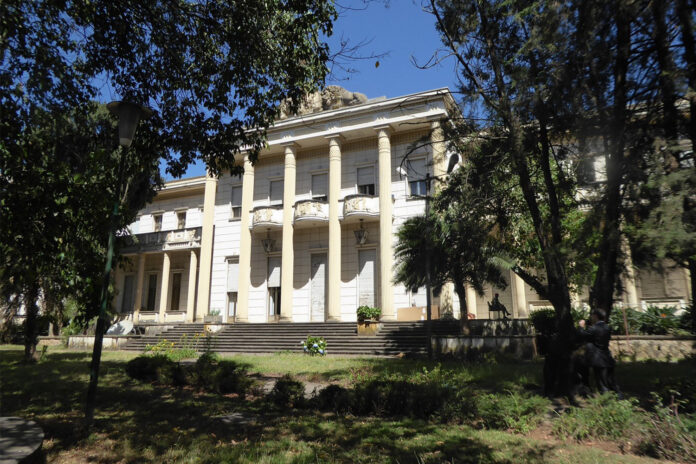 A 12 million euros financing has been provided by the French Development Agency (AFD) for the first phase of the renovation project of the National Palace Project, which will be open to the public.
This Project is part of the commitments taken by French Government during the Head of State visit in Addis Ababa in March 2019 in favour of Ethiopian Heritage program. The agreement was signed on July 16, between Ahmed Shide, Minister of Finance, Valérie Tehio, AFD Country Director and Frederic Bontems, Ambassador of France to Ethiopia and the African Union.
The National Palace was built during Emperor Haile Selassie reign and has become one of the most emblematic national buildings of Ethiopia, though it was never opened to the public and was used as an official residency that is currently used as the official quarters of the President.
The first phase of the Project will cost 20 million euros and will consist the opening of the Palace to the public along with the park in front of the Palace. A complementary grant of 8 million euros is expected to be provided by AFD in 2021 after the launch of the works.
Palace Administration will be in charge of the implementation with the support of Expertise France, a French public agency and key actor in international technical cooperation, specialized in designing and implementing technical cooperation projects especially through participation of French public institutions such as Versailles’ Palace organization which will intervene and provide assistance to this project.
In a related news AFD signed an 8 million euro grant agreement on the same day to support the Agricultural Transformation Agency (ATA) to develop agribusiness capacities and access to finance in the agriculture sector. This project is part of the Agriculture Commercialization Cluster (ACC) program, supported by other development partners, such as the Danish and Dutch Embassies and the European Union.
The objective of this financing is to develop the investment capacity of smallholder farmers and the small and medium-sized agribusinesses by providing them with inputs and capacity development services and by upgrading and adding value to the commercial chain of their production.
Within 5 years, it is expected to develop productivity and revenue generation of 1.8 million small farmers and 1,340 agri-SMEs, including them in the value chains from production to marketing, and developing their access to credit and dedicated financial services in order to increase their investment capacity.